Project MALLOW answers the question we've all been asking for as long as I can remember. What would happen if you crossed Angry Birds with Super Meat Boy?

Okay, maybe we haven't been asking it for that long, but it is a pretty interesting query. And the end result is certainly something unique.

It's tough as old boots, full of scrappy challenge, and is likely to appeal to anyone who likes their arcade games sharp and hair-pully.

The game sees you twanging a lump of marshmallow around a series of levels. Instead of trying to destroy structures, you're trying to get from A to B.

To begin with that's reasonably simple, but after a short few levels you're contending with all manner of contraptions and obstacles that make the whole thing frantically difficult. 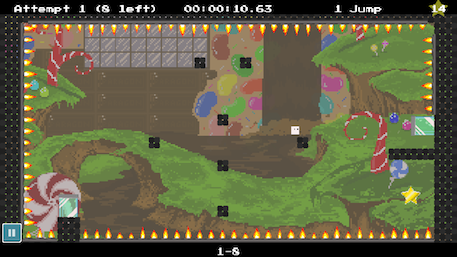 But getting to the end of the level is only part of the fun. Each of the little levels also has a move limit, a time limit, and a star that you need to collect.

You get a gold star just for finishing a level, but you use these to unlock new content. And as things get tougher, you're going to have to head back to easier challenges in order to proceed. 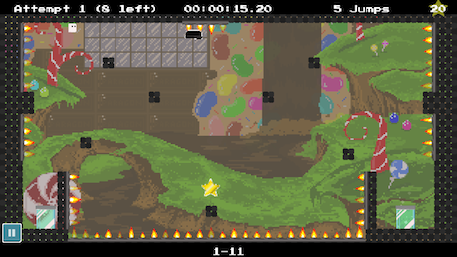 It's a system we've seen before, and it works pretty well here. You've also got a limited number of lives. When these run out you can watch a video to get some more, or choose from two IAPs. One gets you a hundred lives, the other gets you unlimited lives.

I know some people will vomit into their mouths at the idea of IAPs, but to be honest I think it's a pretty smart way to monetise a game like this.

This is an angry game of catapulting and abject failure. And there's a chance that some of you reading this are going to think that's exactly the sort of combination of factors you want on your phone. And I couldn't agree more.

It might have some jagged edges, but Project MALLOW makes it fun to snag yourself on them
Next Up :
PUBG New State review - "Not-so-new state, but still enjoyable nonetheless"

Try not to toast yourself in the hard-as-nails platformers Project MALLOW, coming soon to iOS/Android