That might not sound like the most inspiring pitch - after all, the genre is overly subscribed on iOS - but this offering at least attempts to try something new by including a card collecting mechanic and some stunning visuals.

On the surface, things are as you would expect. Enemies pour in from certain directions, so it's up to you to build towers that slay them before they can make it to your weak spot.

Towers range from projectile hurlers to flamethrowers, with poison and slowing towers thrown in for good measure. Relying on just one type of tower is never wise, though. By combining their skills, you see, you can create a wandering pathway of death certain to dispatch even the most aggressive foe. 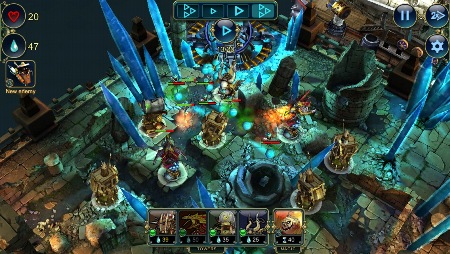 Enemies come in all shapes and sizes, so you need different strategies to take them out. Airborne opponents need special towers to take them down, for instance. Lumbering monsters, meanwhile, can take an astonishing amount of punishment, so you'll need to slow them or poison them.

Often, you'll find that might alone isn't enough to stem the tide; you'll also need to funnel enemies down a particular route to ensure that the appropriate amount of damage is dealt out.

It's here that the game's lush visuals prove to be something of a weakness; pathways are rarely obvious and you'll sometimes place a tower in the wrong location as a result.

Graphics aside, Prime World: Defenders resembles a very traditional TD title. The aforementioned card collecting element, however, does a lot to make it stand out from its rivals.

During play, you'll acquire special cards that unlock new towers. In the game's Forge, you can fuse together certain cards to create more powerful towers, as well as other things. Add to this a "Talents" system that enables you to gain various upgrades, and it soon becomes clear that success in this game relies heavily on grinding and building your strength. 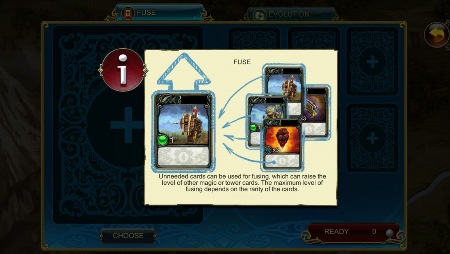 It's on the cards

Despite the relatively expensive upfront cost of the game, in-app purchases are included here. These aren't essential, however. You should only consider them if you're desperate to gain some currency quickly and with as little effort as possible.

There's an awful lot of game on offer here - this is based on a full-scale PC release, after all. And if you're prepared to invest the time, then you'll be generously rewarded.

However, there are issues with which to contend: the graphics often make it hard to see what's going on, and the core gameplay doesn't really deviate too greatly from the tried-and-tested tower defence template.

It's a rough gem, sure, but it's one that's worth looking at if you're a fan of the genre.

Prime World: Defenders is tower defence-meets-card collecting. And while there's plenty of meat on the bones, some irksome issues take the shine off things slightly
Next Up :
REDMAGIC 8 Pro review - "A beast in performance, but not without growing pains"

Hands on with Prime World Defenders on iOS and Android