Portal Walk is a platformer that sort of plays by its own rules. It's tough, but not in the twitchy, hyperactive way we've come to expect from mobile leapers.

Instead there's a slight floatiness to proceedings. And rather than split-second timing, here you need to concentrate on not getting shot to death by the host of foes that are spread out on every level.

There's certainly fun to be had here, but it's occasionally mired by frustration. Portal Walk isn't perfect, but if you're looking for something a little different it's almost certainly worth your time.

Portal walk with me

The game sees you playing a hooded up imp creature who's traversing a series of different levels. You're trying to get from A to B, avoiding dying in the process.

There are keys to collect, piles of dynamite to blow up, and batteries that you need to collect in order to power up the door that acts as your exit.

It's a standard enough system, and the controls are going to be instantly familiar. Buttons move you left and right, and let you jump and fire your slinghot. 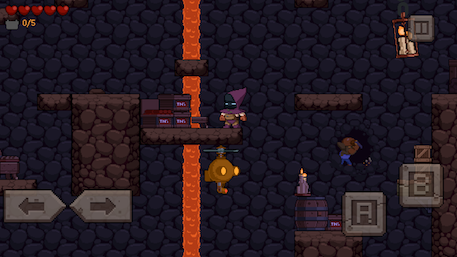 Just tapping your shoot or jump button isn't enough though. You need to press them, especially if you're dealing with larger gaps. And that's where that strange lightweight feel comes into play.

It's going to take you a while to get to grips with the pace of your leaps and blasts, because they're not quite the same as any other game you've played before.

And that makes for an interesting experience. It's tough to wrap your head around, but once things start to click you're definitely going to be enjoying yourself.

But there are some annoyances here too. Sometimes the controls don't register the way you want them to, and with a limited number of revives, that can be pretty darn annoying.

The levels aren't brilliantly designed either, and you can sometimes find yourself heading somewhere you're not going to be able to get out of before you've collected everything you need to move on.

Portal Walk is by no means a bad game, and if you stick with it you're going to enjoy yourself. Just be ready to clench your fists and scream a bit from time to time, and you'll get along with it just fine.

There's plenty to like in Portal Walk, but you sometimes have to look past the bad to see the good
Next Up :
Xiaomi 11T Pro review - "Pro in name, pro in nature"

Portal Walk, the intriguing platformer, is on sale for its lowest price on iPhone and iPad