Setting up the perfect picnic is never an easy task, especially if you are a penguin who can only push items, instead of picking them up and placing them down, in a world full of blocks. Also there are skeletons and office managers who want to suck the life out of you, just to start with. It’s safe to say that you probably won’t ever end up setting up a picnic like in Picnic Penguin, but it’s still a fun game.

Picnic Penguin is a Soduko-inspired puzzle game, recently released by Neutronized - a game developer who is known for colorful and fun little games. This game meets expectations! Not only is the pixel art cute, but it’s colorful, challenging, and the little foods are adorable. Playing as a blue penguin, you need to push around different sized stacks of boxes and various foods, getting the foods onto the picnic blanket in whatever world you are in. 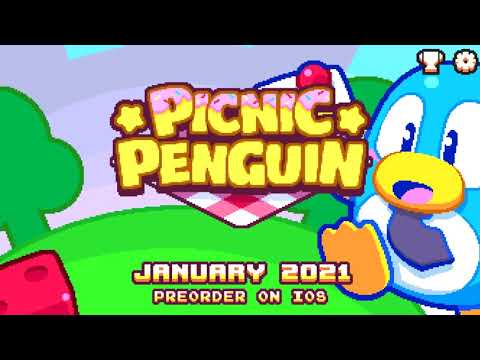 At first, this picnic is happening outdoors, with junk food. You’ll need to move your blocks and items around, trying to get the food to the blanket, however there are often walls in the way. You’ll need to think before you move, as Picnic Penguin does not allow you to undo one move, but will let you reset the entire level. Moving blocks or food counts as a move, displayed at the top of the screen, but moving around is perfectly acceptable and won’t count against you.

The movement in this game is actually quite interesting, as you move with a little thumbstick when you draw around, not connected to the grid. If you need to go outside the main area of the level - which is sometimes needed to move blocks from the outside around - you will find enemies who are looking to chase you and reset the game if you are captured. These enemies will never enter the main level - luckily.

When it comes to pushing blocks, there is a but of a catch with most of them. At first, the blocks you see have a dot on the top, sort of like dice, to let you know how big they are. One dot blocks can push food and food can push one block dots, if you need to push them. However, two dot blocks cannot be pushed by one dot blocks or food - and this scales with three dot blocks. This often limits how you can push the blocks around.

More blocks with more limitations continue to appear in the game, including blocks with arrows only allowing them to move horizontally or vertically, and rectangles that can only be moved in areas that it fits into. Soon, you’ll make it out of the first world, full of snacks, and into new worlds with their own themes and treats. From across beaches to offices, each world has its own enemies, food and theming, which is fun to push into place.

In the menu you can find a bunch of different skins for your penguin, if you are interested in that, as well as a gumball machine. In some levels, you’ll find coins pop-up at random. You can slowly collect up enough of these to have a go at the gumball machine, revealing something cute from within a plastic egg. If waiting for coins takes too long, there are optional in-app purchases for them too.

The only downside with Picnic Penguin is the difficulty. It’s a challenging game, with levels taking quite a lot of gos before you’ll complete them. It’s one for someone who plays a lot of puzzle games or someone who wants a bit of a challenge, coupled with cute graphics and a fun theme.

Picnic Penguin is a challenging game, with super cute graphics, that is aimed at people who want a challenging puzzle to solve! The level design is clever and the gameplay is fun, as long as you don't get frustrated at having to reset an entire level for one bad move.
Next Up :
Evony: The King's Return review