Usually when you try and make something cool, you end up doing the opposite. That almost indefinable quality in a game - its 'X Factor' if you will - is too tricky to pin down, too elusive to accurately quantify.

Which is why when a game comes out with a swagger and a style all of its own, it deserves to be praised. Penny Time might be an advert for an anachronistic plastic skateboard from Australia, but it's also a brilliant blend of endless-runner, rhythm-action, and platformer.

The game casts you as a slacker sort, who's given a magical Penny skateboard that just happens to be able to stop time. It's your job to skate through suburbia, pulling off tricks and racking up points as you do.

You move forwards automatically, swiping on the screen in the right direction when you pass over one of three differently coloured targets. White, blue, and yellow markers require strokes up, right, and down, respectively.

Levels are split into three areas, which are themselves cut in three. In the first part of an area, you collect your score, swiping when you're at the centre of the target to get the most points. In the second part, things speed up a little, and you collect your multiplier.

The third area offers you a choice. Swipe backwards on the screen, and the game will multiply your score and bank it. Do nothing, and you'll store your multiplier so that you can add to it in the next area. Beware, though: a single mistake will set you back to zero.

This mixture of risk and reward is an enticing one for all, while completing a level unlocks a tougher version of it for those who like to swipe and swear a lot. Every successfully performed swipe earns you a chime that mixes into the excellent soundtrack, too.

There's a photo-bombing mini-game in here, as well, and it all blends together to create an engaging and entertaining package.

Penny Time is effortlessly cool, and while it could do with a few more levels, it remains a unique experience in a world full of lifeless clones. 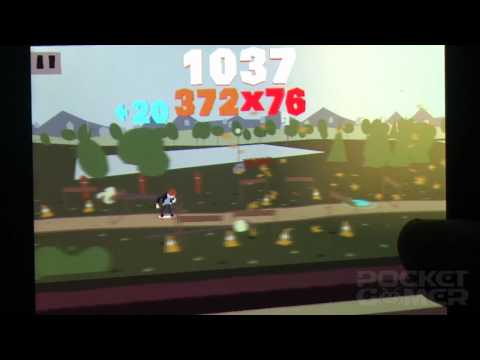 A brilliant little skating game, Penny Time is a hugely entertaining title that anyone can enjoy
Next Up :
Star Discord review - "Needs polish, but it's shaping up to be a true RTS on the go"