Payday 2 on Nintendo Switch can be pretty frustrating. Some of that comes from an inability to pull off the perfect heist, some of it because the squad AI falls short and that can lead to a lot of waiting around.

There are times when the game doesn't clearly signpost that I was meant to wait in a certain spot. Instances cropped up where I'd have to drill into a safe room and stand aimlessly for several minutes. But an awful lot of my frustration came from playing the game in handheld mode.

This is Pocket Gamer, so I spent the majority of my time in handheld mode, playing in cafes and bookshops, attempting to pull off heists while squinting at the screen. My eyes losing details in the muddy visuals and tiny enemy characters.

When stealth is working, Payday 2 is a much more enjoyable experience, but quite a few of the contracts are all out warfare. As soon as an alarm is tripped or the police are called, it becomes a shot in the dark.

On one particular mission, I had to round up goats that were filled with drugs. It was based in city streets and it didn't take long for SWAT to show up.

Snipers huddled on rooftops to take me out and they did so with ease, because early weapons have hardly any zoom on the scope, and the screen limits the size of the sprites. 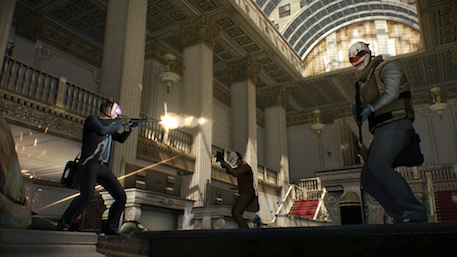 It was only after I lucked out on a few missions and made some money that I could begin upgrading my weapons and character. Money can be used to add scopes, stabilise guns and increase ammo count.

There's a huge number of weapons to use and finding the right combination and the right upgrades is key to whether you'll clinch a mission or not. Sometimes it comes down to what styles of mission are laid out on the map to choose from.

The tutorial gives a good idea of how the game will play out, introducing the concepts that will feature throughout. Controlling hostages, stealing items, and running them to drop off points are the bread and butter of a good payday.

Picking locks, drilling safes, and hacking computers all trigger a waiting bar, which can be quickened via the perk system which boosts your character. The perks are probably the most interesting aspect here. 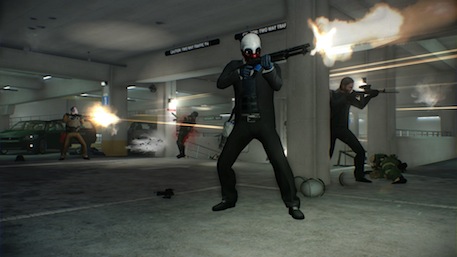 The perks are broken down into categories that personify your ideal play style. You might want to be a defender and will benefit from more armour. A medic can pick up fallen comrades faster and take less damage when doing so. Being a sociopath deals more damage.

On top of this are the skill sets. Playing will earn you points to spend on perks, as well as some skill points. The latter upgrades the pick up range of ammo boxes, speeds up placing sentry guns, or improves your stamina, as well as letting you boost your stats.

When you've find a nice balanced character, your aim is to build up stacks of money the likes of which would make Walter White blush. Playing offline you can choose from multiple contracts with varying difficulty. Little yellow skulls represent the danger ahead, a blue skull tells you the mission can be stealthed.

Contracts are only available for a certain amount of time before they refresh and new contracts appear. They take place over a number of days, which breaks up the action, and they all end with a 'payday'.

This sees you choosing one of three cards which will offer a boost, new mask, or weapon part.
Taking the game online is preferable because the squad AI is spotty. They're particularly good at picking you up as you bleed out, and they can hammer the trigger of their guns, but their helpfulness ends there.

Don't rely on them to pick up bags of money or help with hacking, for this you need a real person behind the mask. This makes single player a lot less appealing, but at least playing with friends creates more chances to create memorable experiences.

The majority of my memorable experiences were from negative situations, rather then successful heists. Times when I'd be running around with a bag of drugs or cash for minutes before the mission decided to announce the pick up van was on the way. 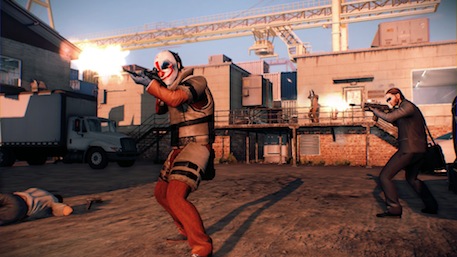 This seems like a silly complaint, but for those minutes the game just becomes a shooting range, waiting in a room as an endless number of cops file through a door into a hail of bullets.

Payday 2 has the potential to be a brilliant game, but it requires a lot of balance. Whether that balance comes from friends joining in, upgrading weapons, or having just the right mission to prove, depends on the player and on future updates.

For now, the game requires a little forgiveness, or a lot of dedication, in order to show what it can really offer. And even then, it's best played when docked to a TV. As a portable experience, this one falls a little flat.

There are some nice ideas here, but especially in handheld mode, Payday 2 can be very frustrating
Next Up :
Warhammer 40,000: Tacticus review - "An approachable strategy to a grimdark future"