One of the things that puts some people off board and card games, even in the digital realm, is the time it takes to play them.

Which is what makes Pathfinder Duels so enticing. You can run through a game of it in ten minutes. Even in that time though there's a depth of strategy and level of polish that other games just can't match.

It's been a while since Hearthstone had any sort of competition in the mobile card-battler stakes, but I think this one could just give Blizzard's classic a run for its money.

The game is set in the Pathfinder universe, and sees you taking on other players in battles to the death. These take place across a twelve space grid. Six of those spaces are yours, six of them are the enemy's.

Each turn you'll lay some cards. These cost mana to play, but your mana goes up every round. That means you can't throw your big bads into the ring at the start and make the game a none contest.

Most cards can't be used until the turn after they're played. Once they're awake they'll attack any cards in the row opposite them. If there aren't any there, they'll hit your opponent's adventurers for some damage. First adventurer to lose all their HP loses. 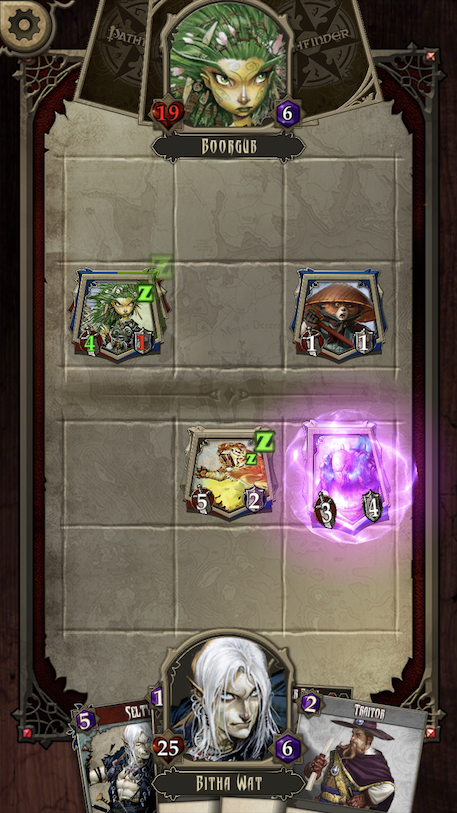 It's a simple system, but it's made all the more entertaining by the different types of cards. Minions are the creatures you play onto the battlefield, but you also get spells which play as soon as they're flipped over.

Many of the cards have different rules on them as well. So while some of your most generic cards are cannon fodder, more powerful ones can shake things up. They might leap a line of defence, give buffs to your other cards, or chuck effects into your foe's ranks.

Add to that the play order, where cards are flipped from space one to space six, and you're left with a vast wealth of tactical options. You can change your deck too, adding more powerful cards into the mix as you earn or buy them.

There's so much going on in the game, but none of it feels overwhelming. A decent tutorial walks you through the basics, and then you're left to experiment in battles with other players to find out what works.

It's exciting too, with the rush of last minute victories combining with the depression of the sudden unraveling of your best laid plans.

Basically, Pathfinder Heroes is everything you want from a mobile card game. It's short, it's sharp, it rewards you for playing, and there's a decent sized community that hopefully is only going to get bigger as word about the game spreads.

A super sharp card game that will have you hooked for hours on end
Next Up :
Evony: The King's Return review

Pathfinder Duels mixes Hearthstone and Clash Royale, and it's out now for iOS and Android