Pako 2 is sort of what would happen if you cut up GTA to its most basic parts. Get rid of the story, most of the shooting, and chuck in a good dash of Crazy Taxi and you're getting close to the concept.

You're driving through a series of open maps, picking up thieves, and delivering them to a different location with their ill-gotten gains.

And that's about it. It's a fast-paced, often nonsensical driving game that riffs on that pop-culture staple of the ridiculous car crash. And it's really pretty good at what it does.

The controls are decidedly simple. Your car drives forwards automatically. Press the left of the screen to turn left, press the right to turn right. Press both of them and you'll come to a stop and start reversing.

The goon in your vehicle fires automatically at the host of police cars that are chasing you. Take too much damage and you'll explode. Your cash total is totted up, and then you jump back in for another run.

You can spend that cash on new cars and trucks with different speed and HP stats, and more powerful weapons, or on unlocking new stages to drive around in. 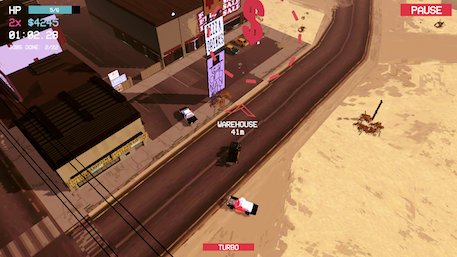 There's a solid beat to the play. And because everything happens so fast you'll find yourself jumping back into the fray as soon as you've died. That arcade thrust is really the key to the whole thing.

It's nice to get new cars, and they do change the game a little bit. Still, there's a decent amount of repetition here. Get to A. Get to B. Try not to explode. Rinse and repeat.

Still, Pako 2 manages to be fun. Thanks in no small part to its excellent design, and the simplicity of thrashing around like a career criminal as other cars explode and drive off cliffs in your wake.

It might not be the deepest game on the App Store, but pushing on to find what the new locations are like, and what difference the new vehicles can make, mean you're going to put a decent amount of time into Pako 2.

It's fun, it's fast, and while it doesn't quite manage to reach the upper echelons of the App Store class list, you're going to play it with a smile on your face.

A fast-paced and often manic driving game. It'd be a crime not to give it a go
Next Up :
Otaku's Adventure mobile review - "A truly bizarre love triangle"

Getaway game Pako 2 is reignited with an explosive update