Obviously Outlast isn't a new horror experience, but it still remains an exciting example of first person survival horror. And its Switch bundle, Outlast: Bundle of Terror, offers up two of the best titles on one portable console.

Whether you're eager to take your first dip into the series, want to pick it up on yet another platform, or just want to see how long you can last without sweating on your Joy-Cons, now's the time to get it.

As far as horror clichés go Outlast has a fair few ticks in its boxes - abandoned asylum, crazy experiments, deranged priest, mad doctor, night vision camera, jump-scares galore, gore (lots of gore), and your casual 'I'll tear your head off if I catch you' foe.

It all bundles together to create an atmosphere of futility and hopelessness, which is exactly what you want in a game like this.

Of course, unlike Resident Evil 7, you've got no hope in hell of fighting off anything nasty that comes your way. Your only shot at getting out of the place alive is either to run or to hide - squealing like a pig is optional (but inevitable). 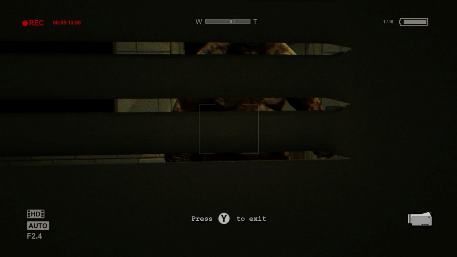 Playing as journalist Miles Upshur you head to Mount Massive Asylum after getting a tip-off about some dodgy governmental stuff going on behind the scenes.

The moment you land in the building, it's evident things have taken a turn for the worse, and you've gone from investigative journalist to hide-and-seek master and exit-searcher extraordinaire.

Throughout the game you've got a few main objectives. One, search for a way out. Two, pick up documents and record whatever you can in your investigation. Three, don't die. All three of those are way harder than they sound once you're introduced to the asylum's creepy residents.

Aside from your own two hands, you've also got a camcorder which contains night-vision mode. In order to stay alive long enough to use it, you have to search for batteries to top up its energy. Trust me, you're going to want to do that.

Red Barrels' use of light is what makes Outlast stand out from other games in the genre. Though the game's primary mechanics are samey and a little generic, light and dark play an important role in your survival.

For example, when escaping an enemy you can take refuge in a dark corner, or if you're a bit lost you can look for the light to guide you along the right path.

The interplay of gloom and brightness also works wonders when it comes to setting the scene and keeping you on-edge throughout the experience.

You can avoid enemies by hiding in lockers and under beds, but make sure they don't catch wind of you, otherwise they'll come looking and you'll have to change your pants in real life.

As far as ports go, both Outlast and its DLC, Whistleblower, run smoothly on the Switch and perform just as well as they ever did on PC or PS4, both in handheld and docked mode.

Though the horror tropes don't bother me when they're done well, it's not like Outlast is a short game. After a while the fear of tip-toeing around and fleeing from your enemy like Jerry Mouse lessens, and becomes a little repetitive the closer you get to the game's end.

However, one particular detail that kept me and my sisters on the edge of our seats was Miles' erratic and obnoxiously loud breathing whenever he came across something startling.

Ironically, though the jumpscares and chases became less terrifying, our protagonist's breathing always gave me goosebumps. 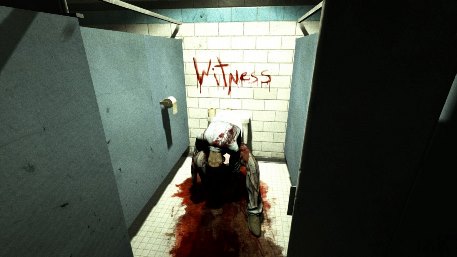 From its crisp and atmospheric sound effects to the fantastic fit of its score, the best experience is definitely had with your headphones on. But, if you've got an audience while playing you may as well crank that volume way up and enjoy the consequences.

Bear in mind the graphic gore and grisly violence hidden inside the asylum's walls are not for the faint-hearted. Once you reach the point of no return and wake to find yourself lying in a pool of entrails, it's rare to find a room that isn't coated in blood or viscera, so don't say we didn't warn you. If that sort of stuff makes you wibbly, maybe this one isn't for you.

Outlast: Bundle of Terror may not bring many new mechanics into play, but what it offers up it does well, keeping you tense, terrified, and sweating at the slightest sound.

While it may get repetitive, it's still an excellent survival horror that's easily as good now as it was four years ago. Just be sure you've got your Switch secured if you're a fraidy-cat-arm-flailer like me.

Outlast: Bundle of Terror is a generous survival horror bundle ideal for newcomers to the game and old hands
Next Up :
Nacon MG-X Pro Mobile Controller review - "A practically perfect mobile gaming controller"

Outlast: Bundle of Terror's surprise Nintendo Switch eShop release has us shaking in our boots