Much like Outlast: Bundle of Terror, Outlast 2 has been well-awaited on the Switch. It may not be family friendly, but it's detailed, nerve-wracking, and a great scary game for taking with you on the go.

Having only released last year on other platforms, Red Barrels' newest swing at the series is confident and refined, and certainly draws you into the story as well as the horror going on around you.

I'm looking for my wife

Set in the Arizona desert, you play as cameraman and investigatory journalist Blake Langermann as you and your wife, Lynn, are chasing up a story about a young woman. The so-called Jane Doe was pregnant and found murdered, but that's only the beginning of the strange goings-on.

When your helicopter goes down and your wife is nowhere to be found in the wreckage, it's you and your camcorder against the world. Between that, weird, derelict shacks, a skinned helicopter pilot, and a creepy, shambling woman with a mean swing, the game of survival really begins. 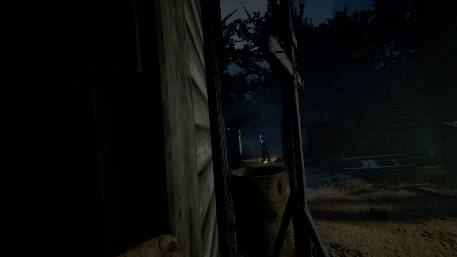 What makes Outlast 2 more terrifying than the first in the series is that it's based around Sullivan Knoth and his insane, cultist 'flock'. Sure, 'test-subject patients in an insane asylum' is a good start, but crazy cultists aren't exactly works of fiction.

The real star of the show, however, is the flashback-style subplot running alongside the main game. Focussing on a girl named Jessica that you used to know at school, these brief snippets bring about real issues in a careful manner and you gradually uncover her story, facing some excellent periods of psychological scares as you go.

If you've played Outlast, you'll be familiar with the mechanics. The regular/night-vision camera comes into play as the game once again does a great job with using light and dark to its advantage.

You still have to collect batteries to keep your gear juiced, but since there aren't any cultist notes lying about you have to gather information by recording. Sometimes that takes a little while, putting the pressure on you that much more.

Given its genre it's weird for me to think how pretty it is - carcasses aside - and it's ported fantastically to the Switch. It runs in super smooth 30 FPS, has gorgeous environmental design, and the use of sound is still utterly brilliant.

It's also great that Red Barrels has included a brand new Story Mode which lets you experience the narrative with fewer enemy encounters. Perfect for all of the nervous folks and massive fraidy-cats out there and, yes, you can switch game modes in the settings screen.

My wife is missing

Despite all its advancement from the first game, it still manages to fall into the same rhythm. Its controls are easy, but grow tiresome, its gameplay is exciting, but eventually becomes stale, and throughout most of the major events you find yourself in an ever-repeating circle.

Run away from the bad guys, pick up batteries, film events, rinse and repeat. 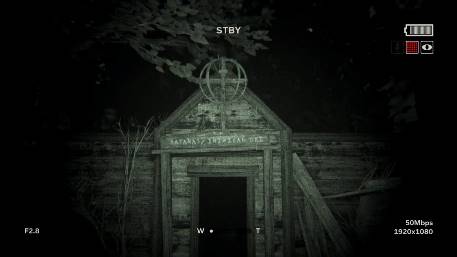 Though it adds an interesting extra element to keep you on edge, the HD Rumble at the moment in handheld is way too violent. I don't oppose using the feature as it adds to the atmosphere, but maybe it could do with being more subtle, at least when the Joy-Cons are attached to the main body.

That being said, Outlast 2 is a must-have experience for all horror and thrill-lovers. It does contain scenes which some players may find distressing, including scenes of a sexual nature, graphic violence, and some pretty intense gore throughout. So, maybe do a little research if you're sensitive to these things.

As far as Switch horror games go, this is easily the best you can get on the market at the moment and it's well worth the terrifying ride. Just don't come after me if you can't get that creepy old woman's voice out of your head.

Outlast 2 is full of scares, gorgeous graphics, wonderful use of light and dark, and has a compelling story, but does fall prey to its previous shortcomings
Next Up :
Turtle Beach Recon Cloud review - “A great controller, but maybe not best-suited for mobile”