One of the main complaints about platform games on touchscreen devices is the controls. For a generation brought up on analogue sticks, the imprecise nature of floating pads can be a little frustrating.

One Tap Hero attempts to right this by abandoning any pretence of copying the standard control system of the platformer, and replacing it instead with the titular one-touch method.

While it means some of the direct control over the protagonist is sacrificed, it also means there's a lot less to go wrong.

Grin and bear it

The game is all about repeatedly saving your girlfriend, who keeps getting turned into a bear by an evil wizard. There are three stars scattered across each bite-sized level, and you need to collect them all to return her to her normal form.

Your plucky hero runs automatically in the direction he's facing, often plummeting into holes or popping himself on spikes if you're not paying attention.

Tapping anywhere on the screen performs a context-sensitive action. Usually it's jumping, but depending where you're stood you'll flip switches, climb ladders, or pause your run to make sure you're not crushed by pounding lumps of scenery.

The trappings of a platform game are all in place, from the bottomless pits to the marching enemies who'll kill you with a single hit, but they're wrapped around a core mechanic that fits pretty well onto a touchscreen.

The levels are well-designed, and the difficulty curve ramps up nicely as you make your way through the game. You can finish a level fairly easily without collecting all three stars, but this makes for a sad, and sometimes deceased, better half.

The control mechanic isn't without its flaws, and sometimes objects that change what you do are too close together, leaving you pulling a switch when you wanted to jump or vice versa. The fact you can't change direction makes for some intriguing puzzles, but it sometimes leads to frustration as well.

One Tap Hero is a valiant attempt to do something different with the platform genre, and it just about manages to pull it off. It's not perfect, but it's a hugely entertaining step in the right direction. 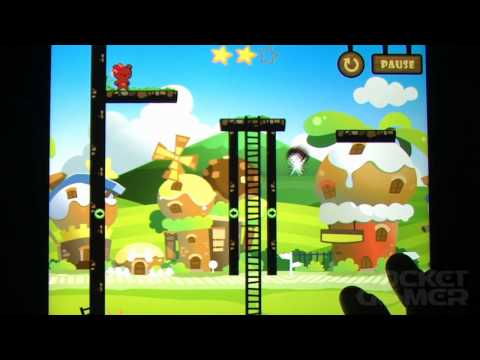 Whilst its intriguing central conceit isn't always perfectly implemented, One Tap Hero is enough fun that you can look past the occasional frustration
Next Up :
Hero Emblems II review - "Lovely visuals and music, but match-3 combat lacks strategic depth"