Nokia has launched a Facebook spin-off for its N-Gage beat- 'em-up game ONE.

It's called ONE Survival of the Fittest, and involves creating a fighter and challenging friends on the social network at turn-based fights, unlocking new moves as you progress.

The Facebook app promotes the N-Gage game, with adverts taking users through to its product page on the N-Gage website. 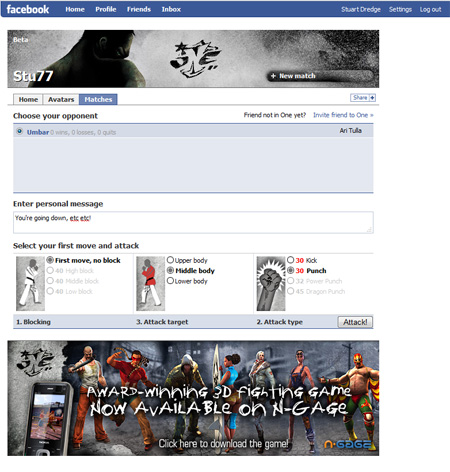 It's an innovative idea, not least because the Facebook version is a game in its own right, rather than a purely promotional application.

It's not the first venture into Facebook for N-Gage, of course. Nokia's Reset Generation was playable from within the social network, too.

Watch your friends get thrashed by ONE’s El Aquila

ONE fights its way impressively onto N-Gage