iOS
| On The Wind

If On The Wind is like anything, it’s probably TheGameCompany’s PlayStation bluster-‘em-up Flower.

Both games see you take control of the wind, swooping through levels to gather up leaves. And both games take a rather artsy, minimalist approach to fun, placing aesthetics and ambience over gameplay.

While Flower eschews virtually all familiar gameplay tropes, On The Wind is a little more traditional in its design. It’s a fairly straightforward side-scroller where you’re asked to weave through abstract landscapes, gathering up leaves in a bid to reach the end with the highest score possible.

Leaves eventually drift to the ground or take root when you hit obstacles, so you’re constantly scouting for more to sweep to avoid Game Over.

As you progress the screen scrolls more quickly, obstacles become more labyrinthine, and the seasons change. That’s not purely for visual effect, either - as you approach winter and the end of a run leaves become an increasingly sparse commodity, meaning precision and speed are vital.

In fact, despite its airy minimalism, On The Wind’s a surprisingly tense affair as you reach its later stages.

On The Wind employs two distinct control setups. The first is functional enough, letting you trace the path of the wind directly with your finger. It gets the job done but ends up obscuring that pretty artwork and - more problematically - your route ahead.

The second, however, is a bit of a revelation. It dramatically ups the sensitivity to the point where you can play with your thumb firmly in place and rock it back and forth with miniscule motions. It takes a little getting used to, but works so well that it’s a wonder nobody’s thought of it before.

While it’s genuinely mesmerising to watch those leaves dance around the screen, we’d be remiss if we didn’t bring up the issue of longevity.

Even the most cack-handed players shouldn’t struggle to see the end of winter, and after that your only real reason to return is for a better highscore.

A fair number of tricky achievements aim to stretch things out further, but that’s slim recompense if you’re the kind of person who prefers a more structured experience to free-spirited self-improvement.

It’s hard to begrudge On The Wind too much, though. It’s a wonderfully captivating, artfully produced experience that deserves to be played. Just don’t expect to be playing it for very long. 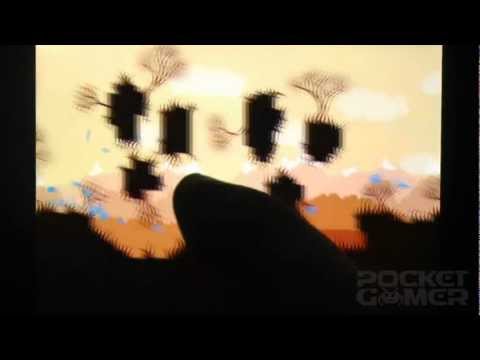 An artsy, hypnotic little curiosity that’s as slight as a summer’s breeze
Next Up :
DC Worlds Collide review - "DC fan service in an enjoyable gacha package"