Following the pattern of a number of Switch games, Oceanhorn: Monster of Uncharted Seas isn't a new title. Having released initially on iOS back in 2013, it's since come to console and PC.

Playing the game on the Nintendo Switch however just feels right. And the whole thing runs like a dream. Of course, that doesn't mean it's perfect.

Off on an adventure

The game kicks off as your dad writes you a letter of farewell, explaining that the sea monster, Oceanhorn, has come for him.

Long after the night your dad disappears, you wake on Hermit Island having followed his instructions. Now, you're on a quest to find him and to figure out what awful monster plagues the uncharted seas. 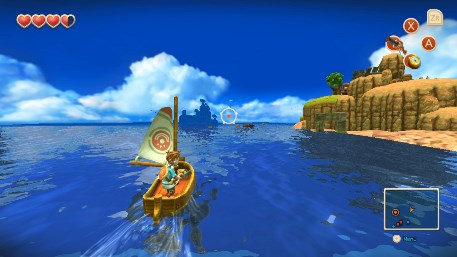 The first thing you'll notice is that you can't jump or, thankfully, walk off ledges that are particularly high. Whilst that requires a bit of an adjustment initially, you get used to being without the basic command and continue on.

You can pick up and throw things, use your shield and sword (once you have them), and eventually you'll gain other abilities like bomb-throwing and spell-casting. This all makes for a pretty classic, Legend of Zelda-like adventure puzzler.

The actual method of sailing between oceans is quite a neat concept. You don't physically sail between them, but you do control a ship-based gun to deal with the various sea-mines and sea-monsters that appear on the journey.

When playing the game on the Switch it ran beautifully. A fluid 60 FPS with no lag or control delay, regardless of whether it was docked or undocked.

This means that you can fully enjoy the isometric view of the game's rather pretty 3D environment. It might be a little outdated, but it's still rich in colour and design.

Its soundtrack is equally enjoyable as the high quality score accompanies your adventure noticeably without overpowering the experience. It also varies enough between islands so as not to become repetitive.

The controls themselves are very responsive. It's also nice to have a reference as the buttons are laid out clearly on screen. This comes in handy once you gain your magic and bomb abilities.

Be warned of choppy seas

The downside of the controls is that it's very easy to accidentally use an ability without meaning to - namely the bombs. With no way to cancel it once you pull out a bomb, you have to place it or throw it before it blows up, and I've wasted my fair share of them. 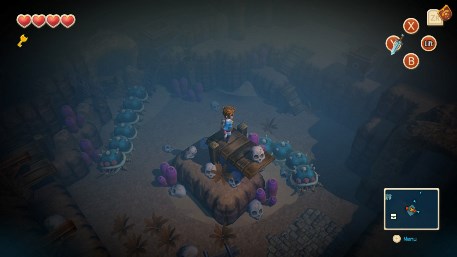 Going back to the controls whilst sailing, the turret movement is very jerky and a tad overly sensitive. This isn't the biggest deal considering your unlimited ammo but it can get a little frustrating when you're just trying to line up a shot.

In terms of the actual puzzles, they aren't particularly challenging and it was easy to either guess or stumble upon the answer. The enemies also pose little threat, at least to begin with, as you can take them down in a handful of swipes or block their attacks with a surprisingly strong shield.

Is it a monster?

Overall, Oceanhorn: Monster of Uncharted Seas is a tidy game which offers up a decent adventure despite its unoriginal ideas. Just because it's been done before certainly doesn't make it any less enjoyable.

Obviously the game's been around for a while, but it feels right at home on the Switch. This isn't a slapped-together, half-arsed port, but rather a very decent release of the game built for a hybrid console.

It would have been nice to see some of the Switch's features, like motion control and HD Rumble, implemented to make the game truly stand apart from its PC, console, and mobile releases.

Oceanhorn: Monster of Uncharted Seas is right at home on the Nintendo Switch, if only it implemented more of the console's features
Next Up :
Alien: Isolation review - "Chestbursting fun in the palm of your hand"