Fortunately, developer Giant Games is here give us that experience in a way you've never expected before with Night of the Full Moon, an RPG-like card game that will keep you hooked from beginning to end.

Night of the Full Moon - Story

In Night of the Full Moon, you play as Little Red Riding Hood, as you’d expect. But instead of being a cute little child, she is a knight, a witch, a nun, or even a soul hunter; it all depends on how you want to play the game.

You can choose any class you want, but the difficulty will increase depending on your choice. Not only that, but you can increase the challenge a bit more after you’ve played through the game the first time.

Unlike the story most of us know, this time Little Red Riding Hood’s grandmother is missing, and she embarks on a mission to the Black Forest, where it’s always dark and night, to find her. Throughout her journey, she’ll find many different humans, werewolves, and elves, all trying to kill her.

Your only line of defense against these terrible, hideous creatures is a deck of cards. You know, like in the real story. You’ll use the cards you have at your disposal, along with new powerful cards you find in your journey to defeat all your enemies.

The game is pretty straightforward, and you won’t have any issues playing it. Plus, you won’t have any problems defeating enemies at the beginning of the game, so you’ll move forward fairly easily. Don’t expect the game to remain the same, though. Some enemies are hard to beat and even unfair at times; it’ll all depend on your strategy and luck to draw the right cards.

You’ll play different chapters throughout the game, each one with several pages of enemies you need to defeat to make some progress. As you move forward, you’ll fight against bosses and key characters that you’ll interact with.

The more enemies you defeat, the more bits of the story you’ll find. And in the end, you’ll get a different ending depending on the choices you made throughout the game.

I really liked the story in Night of the Full Moon, but I enjoyed the journey a lot more. The game is enjoyable to play, and it makes you want to keep going just to find more colorful characters and improve your stats.

The best part is that Night of the Full Moon gives you a lot of replayability. Once you finished your first playthrough, you can start over with a different class or difficulty. You can make other choices and unlock every ending there is.

There is also a twist to it!

As mentioned before, Night of the Full Moon has some RPG elements to it. Not only will you be able to choose the class of Little Red Riding Hood, but you’ll also level up the more experience you earn. If you’ve played any RPG games before, you know sometimes it can be tedious to grind the game to gain the experience you need to level up or find the right cards you need. No matter how good a game is, this part of any RPG feels more like a chore than anything else. 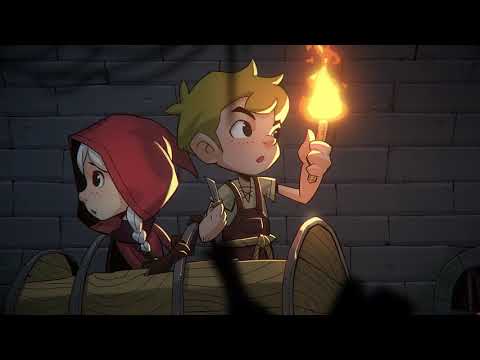 Night of the Full Moon - Graphics and artwork

One of the strengths of Night of the Full Moon is the visuals of the game. The game is gorgeous to look at, and even though everything takes place at night, it all feels bright and vibrant. There isn’t one thing about it that’s ugly, and that’s surprising to say in a game filled with scarecrows and witches.

Everything, from the cards to the characters, is beautiful, and you’ll be amazed at how detailed it all is.

Overall, Night of the Full Moon is a joy to play. The story, the gameplay, the aesthetics. No matter where you look at it, the game is a piece of art, and you can tell how much effort and love the developers put into the making of this game.

Even if the gameplay can get repetitive at times, and you’ll need to do a lot of fighting if you want to gain more levels or cards, everything you do is worth it if it means you get to save your grandma from the big bad Black Forest.

And once you’re done with Night of the Full Moon, here are other excellent card games you can play on your iPhone.

Night of the Full Moon is a new way to look at an old story. Even if the grind can get tedious, the game itself is a joy to play and you should do yourself a favor and play it now.
Next Up :
REDMAGIC 8 Pro review - "A beast in performance, but not without growing pains"

Night of the Full Moon: Tips to help you in this story-driven card battler

Streetball Allstar codes to get gems, gold and EXP (February 2023)