When’s the last time you played a fun American-football game on your mobile device?

The most recent edition of Madden was mediocre on Apple's tablet, for example, and the original titles are either too basic or too complicated for the format.

With a significant licensing agreement up its sleeve with the National Football League, NFL Rivals manages to be both arcade-tastic and suitably challenging – a great way to celebrate the new NFL season.

In identical fashion to NaturalMotion's Backbreaker 2: Vengeance game on iPhone, the twin objectives in NFL Rivals are to reach the end zone and prevent an opponent from doing the same. And that’s about where the direct simulation ends.

Instead of a whole team, you’re in charge of one player. Name him, design him, and pick his home team. All of the AFC and NFC teams are here: from the New York Jets to the Dallas Cowboys.

Once you've selected the most imposing and athletic specimen you can find, it’s time for an offensive or defensive run down the field. Both modes use arcade-style gameplay to turn the 100-yard battle into twitch mobile gaming.

The offensive run down the field is simple and intuitive: tilt forward and back to start and stop, and tap one of the icons to sprint faster, juke, spin, or perform a show-off move (called “swagger”).

A defensive back or linebacker will try to tackle you about every ten yards, and he isn’t kidding around – if you maintain a less-than-stellar pace, he will slam you to the turf, no questions asked. NFL Rivals really pushes your ability to dodge the opponents.

The defensive battle is even more straightforward: run up to your opponent and clothesline him before he reaches the end zone. Helpfully, a little light shows you where he currently is on the pitch.

While the field is mostly clear, both modes offer bonus squares that will give you extra points when sprinted over. These points beef up your overall XP, raising you from the rookie designation (Prospect) to the higher rankings.

You get five 'lives' per game, and each game contains five waves. Lose all five lives before you complete the game and you kiss goodbye to all the points acquired in the current game. This initially makes NFL Rivals feel harder than it should be, but within a few run-throughs the difficulty level feels just right.

NFL Rivals has a few fanboy touches, too. When you score a touchdown, for example, the equivalent real-world team's experience points go up, too. The game collects all the XP from all the gamers and keeps a ranking for each NFL side. It’s a nice incentive to keep on playing and put your favorite team on top.

Only two things slow NFL Rivals down. One: the low camera angle occasionally obscures the person about to tackle you, but this happens too rarely to be a major problem. Two: while you can track friends and opponents online, a true two-player mode over Bluetooth or wi-fi would make NFL Rivals great.

Though it has a modern sheen, NFL Rivals harks back to the fun old skool gridiron games that were easy to pick up and addictive to play. It’s definitely worth a look. 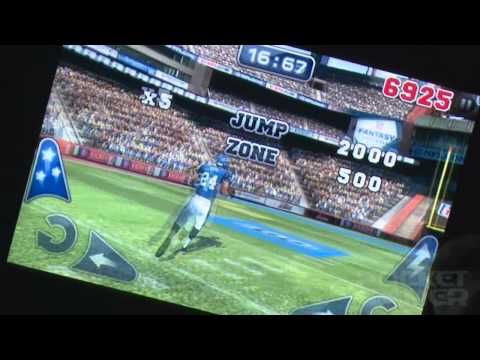 Both visually strong and effortlessly old skool, NFL Rivals is an addictive arcade take on American football
Next Up :
Hindsight review - "Deeply emotional but a tad repetitive"

NaturalMotion's Torsten Reil on why NFL Rivals is its best looking sports game ever; no Backbreaker re-skin