Snapping up a big license was often an easy – if costly – way of shifting millions of units.

On iPhone, however, games based on the big TV and Hollywood franchises seem to be finding success harder to come by.

As estimated and/or calculated by Jeremy Laws on his Cabana Mobile blog, while recognisable names feature in the top 20 TV and movie games in the US – The Price is Right coming out on top overall, with Star Wars: The Force Unleashed taking second spot and Fast & Furious holding third – none of them currently feature in the App Store's overall top 150 titles.

Also of note is the overall lack of movement, with Laws revealing that nine of the top ten titles that made his previous rundown in December 2009 still featuring in his current chart.

"There are a handful of new strong performers," Laws says on his blog. "But in general my take is that paid movie and TV game titles aren't playing a particularly important role in the App Store, and are certainly not the revenue stars of the show." 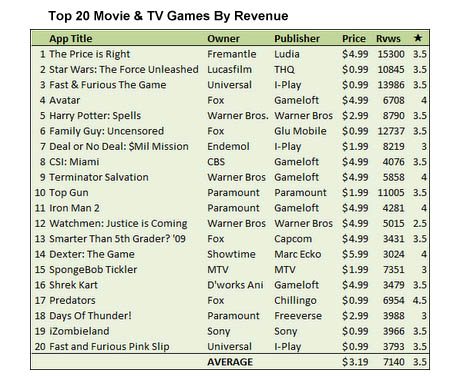 "This clearly presents challenges to studio/network digital and licensing groups, who are undoubtedly saddled with unrealistic expectations about how their properties should be performing in a climate of smartphone exuberance."

It's possible the supposedly level playingfield the App Store provides is working against such licenses.

While shoppers will spot a familiar franchise on the shop shelf, on the App Store, gaining attention comes in a multitude of ways – promo spots with Apple or thirdparties such as OpenFeint or FreeAppADay being popular routes, not to mention price cuts.

Unless licenses opt for one of these routes, the advantage that comes with their name can be lost.

Nonetheless, Laws' review suggests there is still money to made. Though hiding the exact figures, his title-by-title revenue estimates range from $600,000 to $3 million, with the average coming in at $1.3 million per release.

Although, in such scenarios, subtracting the cost of a licence and development doesn't leave much profit margin.