There aren't many brilliant horror games on the App Store. There are some good ones, but few if any of them manage to really creep their way into your bones.

Within a few minutes though, you get the feeling that Neverending Nightmares is different. It's rich with threat, dripping with existential dread, and looks like nothing else you've ever played before.

And it doesn't throw its scares at you in rapid succession. It understands that fear comes not from the monster leaping out of the darkness, but from the moments before, from the tension of the unknown.

At its heard the game is a pretty simple point and click adventure. In a black and white world, everything you can interact with is coloured in. So the door handles are gold, the candles flicker orange and red, and the wreaths on the graves are purple and green.

It's a clever system, and it means you're never worrying about mashing the screen just to find out what you're supposed to be doing. It lets the story breathe, and when it does breathe, it breathes down the back of your neck.

I don't want to go into too much detail here, because discovering things for yourself is one of the joys of the game. But there's an old house, some recurring dreams, and an awful lot of blood. 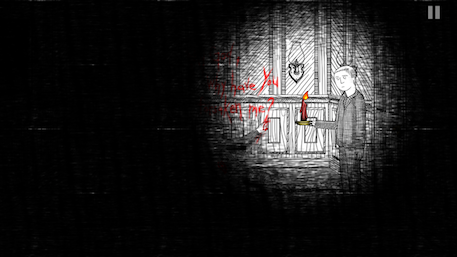 But the game never throws its shocks or schlocks at you without careful thought. The main atmosphere here is one of confusion, loneliness, and loss. Which is understandable since the main inspiration here is the developer's mental health problems.

There are shades of other games here, from Resident Evil to Silent Hill, but Neverending Nightmares goes much further and deeper with its references. And it spins its own symbols into the mix as well, creating a vernacular of terror that's all its own.

It would be churlish to complain about the simplicity and repetitive nature of the game, because those are two of its key narrative points. The nightmares are neverending, and you're stuck in them from the very start.

It's been a long time coming, but Neverending Nightmares feels like the mobile horror game done right. It's more psychological than spooky, and its monsters are often just in your head. In more ways than one.

Turn off the lights, get a blanket to hide under, and spend as long as you can wandering the desolate halls and bloody kitchens that the game offers. Trust me, you won't be disappointed, and you will be terrified.

A genuinely scary horror game, Neverending Nightmares is something you need to experience
Next Up :
REDMAGIC 8 Pro review - "A beast in performance, but not without growing pains"