Neo Angle review - A triangle-shifting puzzler that's worth checking out

Neo Angle is another one of those puzzlers that sees you moving a triangle around a grid. It's not as demanding as the likes of the recently released Yankai's Peak, but there's fun to be had here all the same.

It's well presented, and there are some neat ideas here too. It's more of a head-scratcher than an action game, as you'd expect, but it fills the brief pretty nicely.

There are a few niggles here and there, but all in all this is a solid game that should keep you entertained for a decent amount of time.

You control everything here with swipes. There are power cells to collect on each level, and once you've grabbed them all you need to move to the exit.

That's easier said than done though, because you can't go over a space on the grid-based levels twice. 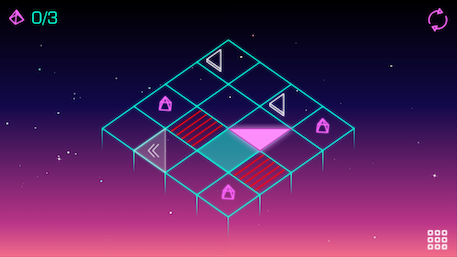 You're swiping in the direction you want to move, but since you're moving a triangle, the pivot point changes depending on which way you're heading.

Sometimes you can swing out over the edge of the level to pass a tricky spot, other times you're going to need to stab that restart button to have another go at the challenge.

Everything is slick and well put together, and while there's nothing revolutionary here, you're still going to want to get your fingers pretty deep into this one. 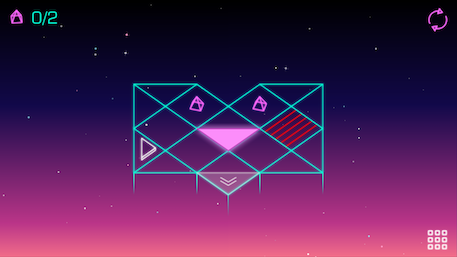 The game feels closer to the casual end of the spectrum than other games of a similar style. It's not super difficult, but there are times when you're going to need to think carefully about your next move.

You're not penalised too badly for your mistakes though. You can always head back to the start of a level, and since they're so small that's not too much of a punishment.

Neo Angle is a decent enough puzzling experience. It's not as sharp as some, nor is it as engaging, but there's still enough here that you're going to enjoy the time you spend with it.

This is a well-oiled puzzle game that offers up the odd new idea here and there. It's not revolutionary, but then that would involve circles, not triangles.

Neo Angle review - A triangle-shifting puzzler that's worth checking out

A clever, good looking puzzler that's got enough going on under the hood to recommend
Next Up :
Hindsight review - "Deeply emotional but a tad repetitive"