Mudd Masher is another retro arcade game with a modern, never-ending twist. Here you're bouncing up and down on angular blocks, a bit like you would in Qbert.

And you're trying to change the hue of all of those blocks. They're a dull shade of brown to begin with, and by stomping across them you bring a bit of life to proceedings.

Change all the blocks and you'll jump off the level and on to the next. And that's sort of it. While that central core of play is interesting, the experience built around it leaves a little to be desired.

The levels are randomly generated, and there are coins scattered around to collect as well. Then there are the enemies.

These podgy brown blobs are sometimes wandering around, but most of the time they'll fall down from the top of the screen. If they touch a block you've already been on, it'll change back to its original hue.

You can clear these pesky critters with a tap, and getting rid of them before they land is the best way to make sure your hard work isn't ruined. You control your movements by swiping in the direction you want to head. 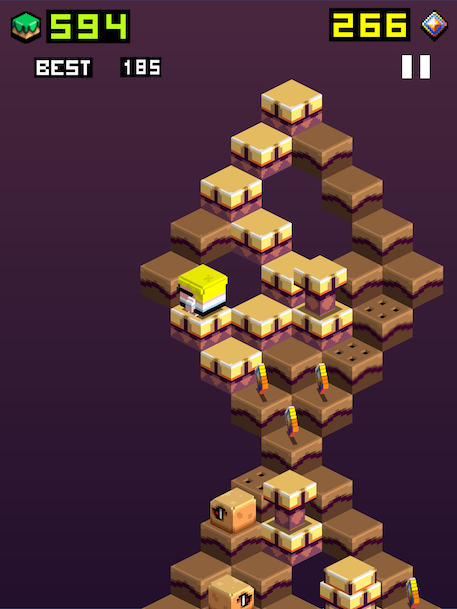 The coins you collect can be spent on continues, and that's about it. Which is a shame, because you're going to end up with lots of them. It'd be nice to be able to buy new characters or skins.

Instead you're sort of just bouncing around waiting to die and start again. It's all a bit too simple, even when new obstacles get chucked in your face.

There are spikes that pop out of blocks, so you need to wait until they're safe before you hop onto them, and different kinds of colour-spoiling monsters.

There's nothing really wrong with Mudd Masher, but there's nothing that's going to entice you to stick around with it for very long either.

It's fun while that spark lasts, but once it's faded you're going to be reaching for that uninstall button pretty quickly.

Mudd Masher has a solid idea at its core, but it doesn't do enough to build on it
Next Up :
Nacon MG-X Pro Mobile Controller review - "A practically perfect mobile gaming controller"