Sometimes, you just wish video games would calm the hell down. Thanks to the likes of Kratos and Asura, consoles have been powered exclusively by unbridled rage for years.

Even the App Store's biggest sellers have succumbed to fury - just look at Angry Birds. Now comes Monster Flip - a game that takes the tantrum to apocalyptic new heights.

First things first - Monster Flip is yet another match-three puzzler. Thankfully, though, there's a lot to recommend under its familiar surface.

For a start, it's a pleasure to play, with a perfectly intuitive interface that allows you to flip a row of monsters with a single swipe.

Do the monster match

In Classic mode, your goal is to match and despatch three or more monsters, with bonus points awarded for combos and chains. Once you've cleared enough monsters to fill the progress bar, it's onward to the next, tougher level.

As you go deeper, Monster Flip introduces its wild card - angry monsters. Match them up and they'll vanish from play - ignore them and a counter appears, ticking down with each turn. Let the counter reach zero and it's Game Over.

With more and more apoplectic monsters added over time, Monster Flip quickly becomes a game fraught with tension. Careful planning is key and no flip can go to waste - and there's a tantilising risk-reward system as angrier monsters net more points when you despatch them.

It's an engaging proposition in itself, but Monster Flip doesn't stop there. Countdown mode gives you two minutes to score big, while the absurdly compulsive Sequence mode limits you to 50 moves and an identical layout each time - meaning success depends on optimising each turn.

Best of all, though, is the cerebral, stage-based Puzzle mode where you're tasked with clearing odd arrangements of monsters within a certain number of moves. Mode-specific leaderboards offer plenty of incentive to keep playing beyond mere self-improvement.

It might be another match-three puzzler at heart, but Monster Flip offers a refreshing blend of tense strategising and score-basing subtlety. Toss in a fistful of excellent variants on the core game formula and Monster Flip delivers a great value, entertaining puzzle experience. 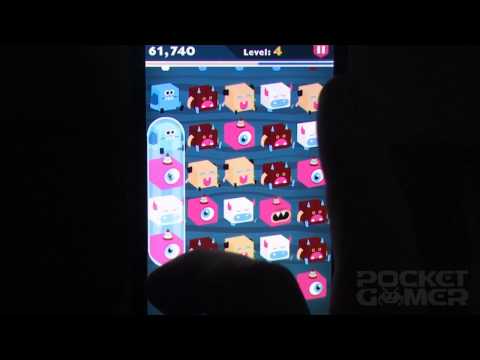 An engaging, feature-packed match-three puzzler that won't leave you fuming
Next Up :
Hindsight review - "Deeply emotional but a tad repetitive"