Minutes is all circles and straight lines, a hectic clockwork traffic that spins, zooms, and drifts across the screen.

It owes its design to a whole lineage of bullet hell shooters, but swaps out the maximalist bullet-mosaics for a cleaner look. It also doesn't arm you. Instead, it distills the genre down to a game of well-observed dodges against a countdown timer.

To succeed in all 60 of these minute-long levels you have to do more than survive. Progression only comes from accumulating enough points to earn at least one of the three stars available in every 60-second dodge-a-thon.

You manage this by collecting the non-black lines and circles that briefly drive across the screen. It may take a couple of tries. No, actually, it will.

This task is made increasingly difficult as the black lines you must avoid cut up your path, creating tricky moving mazes that limit your options.

Collide with too many black objects and the exclamation mark that swells at the centre of your circle will flash, triggering a warning alarm, before exploding to dramatically mark your failure.

But even bending to the precise demands of each choreographed level isn't enough. Minutes is superb at finding new ways to push you head-first into greater risk, testing your command of the left thumbstick.

It wants you to teeter on the edge, and then pull yourself back, adjust your collar, and continue with its disciplined movements.

At first it surprises you with its dynamic level design. One minute it will give you a high-numbered score to reach, sorting through a screen-filling spaghetti of coloured lines, testing your observation and reflexes.

The next minute it reverses this effort. The pace is slowed, and you're given only a few precious lines of colour to absorb as you waltz on the borders of a pulsing void of blackness.

Everything outlined so far is what makes Minutes challenging and smart. But if this were the limits of its design it would be a short-lived affair.

That isn't the case. It finds extra life in the shoulder buttons. With these, you're able to incrementally expand and squeeze the size of the circle you control. 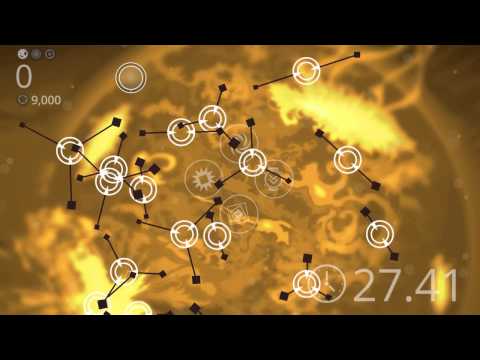 Each size stacks on another point multiplier. A circle that's double the girth of the default one bags you triple the points, while a circle three times as big adds a 10x multiplier.

The gamble here is in becoming more vulnerable. Knowing when to bloat to your biggest size and retract to fit into narrow corridors is core to mastering Minutes.

But you can't reach this esteemed status from the start. Minutes employs an unlock system based on the number of stars you collect.

As the role of the shoulder buttons deepens, you can replay levels to smash your old scores, earning yourself even more tools to try out.

The clever part is that it's not the levels that change, but you. This way you're compelled to test out your new powers over and over in the same enclosed spaces. Those 60 levels are taken for a ride.

You revisit them with the ability to slow time, to wear a shield and, most dramatically, to reconfigure the oppressive black lines with a close-proximity explosion. Experimenting with these tools is a never-ending lesson in how to improve your score.

While Minutes lacks the visual feast typical of bullet hell shooters, it works to find less explored spaces of the genre. It encourages us to do the same, to push out the boundaries and discover the thrill and rewards of risk-taking.

Both endeavours are worth your time. The longer you stay with Minutes the more layers it has to reveal, and it perpetually blossoms as you play.

Minutes may be visually duller than its bullet hell peers but it makes up for it with a variety of game-changing surprises
Next Up :
Star Discord review - "Needs polish, but it's shaping up to be a true RTS on the go"