iOS
| Milkmaid of the Milky Way

At around three hours, Milkmaid of the Milky Way succeeds at being exactly what it sets out to be: a concise charming adventure game. While it isn't a modern classic, it is an enjoyable point-n-click and a refreshing change if you've been playing bleaker fare like The Walking Dead.

A day in the life

The most notable aspect, and what adds most to the game's tone, is the Milkmaid's prose. Or rather its stanzas, as the text is written entirely in rhyming poetry. The colorful and unique approach to text and dialogue instantly cements Milkmaid's fairy tale-like atmosphere.

That fairy tale vibe is present in the story as well, following milkmaid Ruth around the isolated Calf Ledge in 1920s Norway. The first thirty minutes or so see you milking cows, churning butter, and traveling the idyllic fields and cliffs as odd occurrences begin to upset Ruth's daily routines.

And then an alien spaceship shows up. 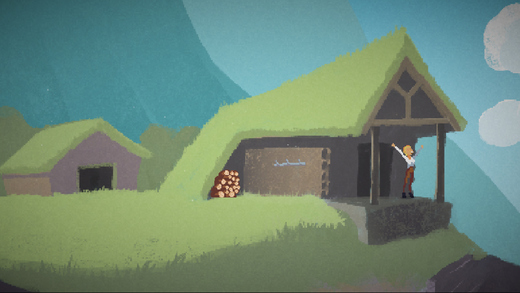 This shift from verdant fjord to bronze vessel turns Milkmaid of the Milky Way into an intriguing sci-fi adventure, where Ruth must face challenges far removed from herding cattle and searching for lost separator handles.

Of course delving into those otherworldly dangers would qualify as spoilers, but rest assured, exploration and classic inventory-based puzzles are a major presence throughout. As is common with the genre, some of the puzzles can be confusing and rely on testing different items until you figure out the solution

However most puzzles are simple enough to solve while being clever enough to feel satisfying and keep the story moving along swiftly.

Milkmaid of the Milky Way only last a few hours, but that lean focused playtime is a strength. If you're seeking a short experience and a pleasant adventure, don't miss this game.

While some puzzles may frustrate, they don't detract from this adventure's charming presentation and atmosphere
Next Up :
Jade Order review - "An puzzling path of the warrior"