Given that the line "kick more mass" is included in its marketing material, you may not be surprised to learn that Mass Effect Infiltrator doesn't really capture the subtleties of its big brother.

There's no time for talking, dialogue trees, or complex character relationships here. Just a big guy with a big gun and a lot of enemies to shoot with it. This may bear the Mass Effect name, but Infiltrator is as burly and brainless as they come.

That's not necessarily a bad thing, of course, but it's somewhat antithetical to a series that's always prided itself on its more intelligent take on sci-fi action.

Here you play as Cerberus agent Randall Ezno, a grumpy sort who suspects that all is not quite right with the pro-human organisation. Not that he has a huge amount of time to think about it, as within seconds he's assaulted by countless Husks and Turian enemies looking to put plasma-flavoured holes in his shiny new armour.

At its core, Mass Effect Infiltrator is a cover shooter, but one that thankfully eschews twin-stick messiness in favour of something a little more experimental.

Yes, you do use two virtual thumbsticks to move and look around, but once you're in cover you tap on an enemy to aim in his direction and then tweak the right stick to perfect your trajectory so you can concentrate fire on a particular part of his body.

You can chuck Mass Effect's signature biotics into the mix with a stab of the top-left corner of the screen, or use special abilities like a cloaking device on the bottom-right. When it all works, it's an elegant system, and one that encourages you to stay hidden as you pick off your enemies one by one.

Unfortunately, that's easier said than done. All too often you'll be surrounded by baddies and the controls will fall apart, leaving you hammering at the touchscreen while completely exposed.

Couple that with weapons that have a peculiarly short range and it's far too easy to find yourself on the wrong side of a Turian blaster. You need patience and a lot of spatial awareness to stay alive even during Mass Effect Infiltrator's early missions.

Thankfully, it doesn't take long to upgrade your weapons and biotics, giving you a fighting a chance. And when the game concentrates on narrower level design it's a far smoother ride.

If you're a Mass Effect obsessive there is a story to enjoy, although it's acted out by some of the poorest voice actors ever to step up to a microphone.

You won't be missing out on any added depth if you don't pay attention, but for some people just the mention of Cerberus or The Citadel is enough to induce a biotic-charged tizzy. You can even upload 'intel' that you pick up on the way to your Mass Effect 3 game, giving you more War Assets for your assault on the Reapers. Mass Effect Infiltrator doesn't quite restore the Mass Effect name on iOS after the travesty that was Galaxy, but it's a far better effort and one of the sharpest cover-shooters on iOS. 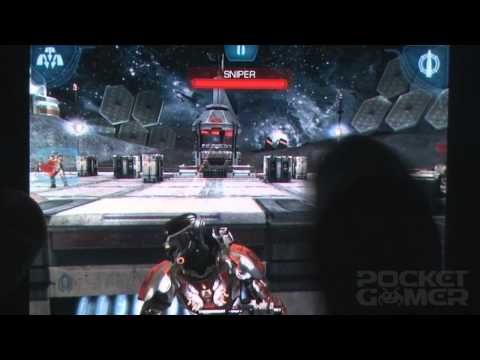 Fantastic to look at and occasionally excellent to play, but too cumbersome and frustrating to do justice to the brand
Next Up :
Catalyst Black review - "Gorgeous visuals, smooth gameplay and fun-filled fights"

Mass Effect: Infiltrator players are a compassionate lot, according to new infographic from EA