It’s funny to think that the endless-running genre barely existed a few years ago. But since Canabalt, Temple Run, Jetpack Joyride and their ilk appeared you can’t take two steps inside the App Store without bumping into another one.

Madcoaster is yet another take on the genre. The premise is as simple as ever: you’re a four-carriage rollercoaster on a thrill ride to nowhere, and you can jump from rail to rail by tapping the screen or swipe downwards to pop down to the track below.

The whole thing’s very reminiscent of Donkey Kong Country’s much-loved mine cart levels, with a tidy balance between barely-manageable speed, pixel-perfect jumps, and brief moments of calm as you transfer from one manic segment to the next.

Like all the best platformers, the best route through Madcoaster is described with coins, and there’s a real satisfaction to be had in arcing a perfect jump over a precipice and snaffling up all the cash on the way.

But, unlike all the best platformers, Madcoaster has an almost sociopathic lust for the blood of innocent animals. You’re actively encouraged to leap up and smash flying birds into smithereens or knock innocent gorillas into oblivion (pun intended).

Quite why developer CGMatic infused such a simple game with such bloodthirstiness is a mystery, but I’d be lying if I said I didn’t enjoy every rollerkill I racked up on my coaster-powered cruise.

If violence alone can't tempt you, Madcoaster keeps you interested with themed worlds that rotate at random.

There’s the Ice World, the Safari, the Haunted House, and the Desert. Where you are doesn't affect what you’re doing, but the slick parallax scrolling and sharply drawn sprites help to make the ride pleasurable.

How endless is endless?

Eventually, though, the fun has to stop. Where games like Jetpack Joyride tempt you back in with post-game lotteries and upgrades, Madcoaster has little more than a confusing levelling-up system (tied into its score multiplier) to keep you engaged.

While the game itself is perfectly competent, it doesn’t have the relentless draw of some of its competitors. When there’s no goal, the initial rush of high score-chasing is soon replaced by apathy. Madcoaster keeps you hooked for longer than most, and its production values are almost faultless for a 69p app, but there’s still the sense that you’ve seen and done it all before. 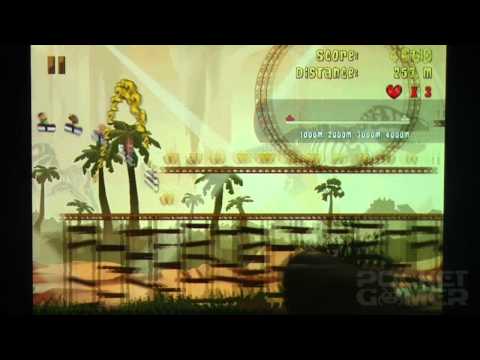 While it’s far from being a revolution, Madcoaster is a very well-made entry in an increasingly stagnant genre
Next Up :
Otaku's Adventure mobile review - "A truly bizarre love triangle"