Nobody knows exactly how many animal species there are, but it's in the millions. Of those, about 88 per cent have starred in iOS games, and Chillingo's latest cutesy casual game Little Acorns adds the red squirrel to the pile.

And like a red squirrel, Little Acorns shares traits with its evolutionary ancestors while just about managing to constitute a distinct species of its own.

But it's worth playing all the same because it combines them in a new way and with a great deal of polish.

The aim of the game is to collect acorns in a series of stages against the clock. While there are enemies in each stage - including bees, caterpillars, and gun-toting grey squirrels - these can't actually kill you. Colliding with an enemy just turns you red and slows you down, though the jumping fish tend to knock you into the water to drown.

The core gameplay involves collecting acorns, avoiding enemies, and either jumping on platforms or swinging onto them from cleats.

As you make your way through the game other elements appear, such as walls that you can only break down by swinging, spring-loaded pads that propel you onto out-of-reach platforms, and power-ups that give you invincibility, extra time, extra bounciness, or extra speed. Some stages also include baby squirrels that you need to rescue as you collect acorns.

Little Acorns starts off as a straight platformer, and its controls and physics are spot-on. But by the time you get to the second world - or year, in this case - platforming skill alone won't get you through. You'll also need to plan your progress through each stage, which adds a touch of strategy.

So the omission of a map screen is surprising and inconvenient, as it means you'll often have to play a stage once or twice to learn where the acorns are so that you can attack them in the optimal order next time. This isn't a huge flaw, but it will annoy you.

Little Acorns currently contains 60 stages spread across the four seasons of three years. By the middle of the second year it starts to get very tricky, so - inevitably - you can buy cheats to unlock stages.

This in-app purchase - and another to unlock the costumes that you can otherwise unlock by collecting fruit at the end of each stage - is tastefully tucked away behind a discreet padlock icon, in case you're looking for it.

The presence of any in-app purchase like this inevitably raises the suspicion that the developer has made his game artificially difficult, and there's probably an element of that here. But by and large the in-app purchases are well-handled.

There are other flaws. While the time limit for stages keeps things short and punchy, it can be incredibly annoying to spend a minute on a level only to fail because you can't get to a baby squirrel or an acorn in time.

For all that the stages are brief, Little Acorns can feel like a game that takes a long time to lose if you make too many mistakes in the first few seconds. Getting knocked off a platform when you're already short on time is supremely frustrating.

Even so, Little Acorns is a solid casual game. The graphics are crisp, the sound is chunky, and the controls are clear and responsive. A couple of niggles mean it's unlikely to reach the top of the App Store's food chain, but it's an inventive and polished platform-puzzler all the same. 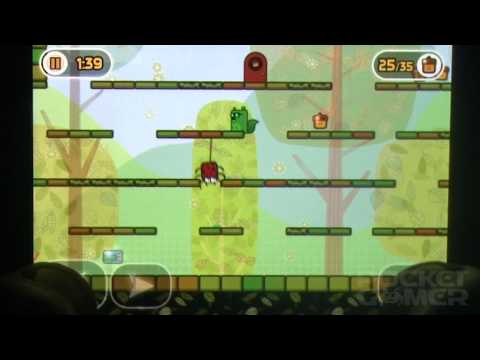 Little Acorns falls short of greatness, but it has many of the hallmarks of a hit iOS platformer and it's well worth a download
Next Up :
Netflix Desta: The Memories Between review - "Pass the ball and conquer your dreams"