Leo's Fortune pops and bubbles along at a nice pace, its simple but invigorating physics puzzle platforming held together by a gorgeous world full of light and shade.

There's a story about greed wrapped around your gold-snaffling antics, but it plays second fiddle to some clever leaping and expanding antics set across a thick chunk of worlds.

It's not the most original platformer you're ever going to lay fingers on, and there are a lot of sections that feel a little too familiar.

But they sit alongside some interesting and innovative setpieces.

It all blends together to create a game that deserves to be played. It's not perfect, but there's enough here to keep you entertained for its not inconsiderable length. 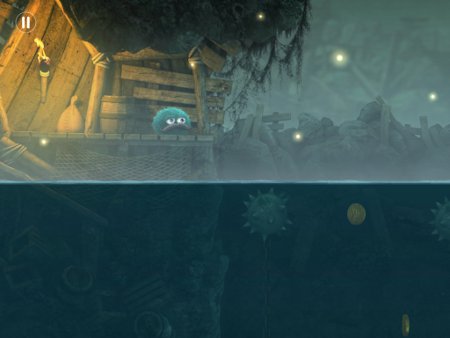 You play as Leopold, a curmudgeonly ball of hair and moustache who may or may not be Russian. His gold has been stolen and its up to you to get it back.

Luckily, whoever nabbed it has left a series of golden coins like breadcrumbs for you to follow.

Sliding a finger around on the left of the screen moves you about, while sliding a finger up on the right expands your fur and sends you into the air.

Swiping down performs a dive bomb move, which allows you to push heavy switches or shift bigger objects.

The sensitivity of the controls takes a little bit of getting used to, and sometimes when you're trying more complex moves like wall jumps it can be a bit of a fiddle.

But after a few tries things click, and you can switch to on-screen buttons. All the same, there's a slightly strange weight to the controls that's a bit different from what platform veterans might be used to. 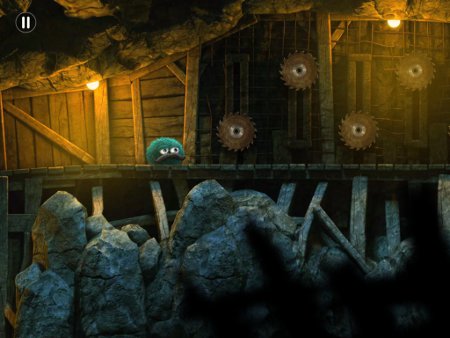 I guess it's time for a haircut then

There's plenty to do in Leo's Fortune, with some replayability to be sucked out of a star system that rates your performance through each of the chunks.

And most of the time you'll find yourself having a blast. The game wears a variety of influences on its sleeve, from Sonic-style loops to Limbo-esque scenery manipulation.

There are niggles, but none of them is serious enough to detract from the solid and playable game that surrounds them.

An engaging platformer that misses a few steps, Leo's Fortune is still well worth a look
Next Up :
Jade Order review - "An puzzling path of the warrior"

Leo's Fortune, the Bronze Award-winning platform puzzler, is out right now for Android