The quality of the ports of the Lego games from console to handheld has been gradually, but assuredly, diminishing over the years.

From the glorious height of Lego Batman 2: DC Super Heroes, the games have slowly declined in terms of scope, ambition, and fidelity to their home console counterparts, as evidenced in last year's Lego The Lord of the Rings.

Lego The Hobbit: The Video Game carries on this unfortunate tradition, and does so in a way that will be utterly baffling to those that have played a recent Lego game on either 3DS or Vita.

Its visuals have been stripped right back, so that it now looks like a high-resolution GBA port: an isometric third-person adventure that contains the core elements of the series but with a significant graphical downgrade. This, basically.

And here's the thing: it needn't look like this. Lego The Lord of the Rings wasn't as pretty as the PlayStation 3 and Xbox 360 versions, but it wasn't far off. It's possible for the Vita (and 3DS) to run phenomenally good-looking games, but Lego The Hobbit isn't troubling the hardware here in the slightest.

To put a positive spin on all this, the world presented retains the silly and serious Lego style, even when presented from far above the action, and it runs smoothly too. Load times are a little too lengthy, but once a stage gets going it never stutters, and the high quality video sequences seem unaltered from their console counterparts.

That Howard Shore score comes through the system's speakers crystal clear, but the witty and frequently funny dialogue of the film is scratchy - a problem which seems to persist across the entire series of the games based upon movie franchises.

Aside from the change of viewpoint, the gameplay remains largely unchanged since the first entries in the modern Lego games. You pootle about stages, fight bad guys with button-mashing combat, rebuild broken Lego structures, swing across chasms, fire projectiles at targets, and so on. There's even the now classic setpieces: chases, arena brawls, boss fights - you know the drill. 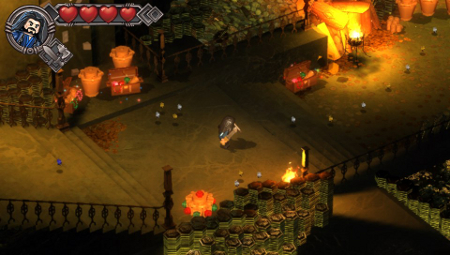 "Dragons covet gold with a dark and fierce desire"

Though the presentation is faithful to the licence, moments where the gameplay interweaves with the themes of the films are kept to a minimum.

There's a scene at the start where the dwarves are causing trouble in Bilbo's home, which manages to encapsulate the movies well: there's eating and drinking and singing and a sense of chaos. But complete the sequence and you're back to battering anything that moves and reconstructing anything that doesn't.

The world of Tolkien is dense, textured, and filled with lore, yet the overworld connecting individual missions isn't the open world of Lego The Lord of the Rings, but a simple series of connecting paths, a la Super Mario World. 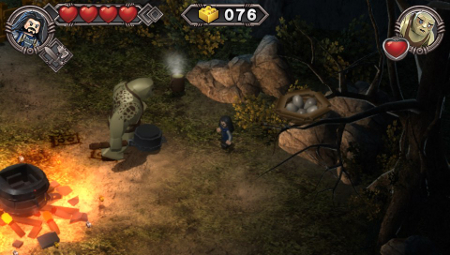 More crucially, there's no multiplayer. The Hobbit is about a group of adventurers who go on an unforgettable quest, helping one another overcome incredible odds by putting aside their differences and working together, and yet there's no way to share the adventure with a friend. Again, it's been in previous versions, but it's not here.

Perhaps I'm not the target audience, though. Lego games have traditionally been friendly for the whole family, but with the abundance of collectables and challenges, the heavy and constant guiding hand, and the simplified presentation, this may be one that's more for the kiddies than their mothers and fathers.

Lego The Hobbit: The Video Game marks a significant step backwards for the Lego games on handheld, then, but the basics of what makes the games in the series great are still here, and all of it is still good enough to earn a lukewarm recommendation if you're buying it for a younger player.

Unlikely to entertain anyone older than 14, this pint-sized port is a real disappointment
Next Up :
Hero Emblems II review - "Lovely visuals and music, but match-3 combat lacks strategic depth"