I'll take that to go

League of Angels - Fire Raiders is the mobile sequel to GTArcade's hit Facebook MMORPG, League of Angels, that remains remarkably faithful to the original title.

As before, you'll be collecting a ton of Angels and Heroes, customising them to match your playstyle, and taking them into battle against the forces of evil or fellow players in a variety of different PvE, PvP, and co-op modes.

All of your angels and heroes can be trained, levelled up, and equipped with enhanceable gear but you'll want to focus on improving your team and finding your favourite formation if you want to succeed in the game's tougher battles.

We spoke to David Johansson, Creative Director at GTArcade about his favourite heroes and angels, formations, and the toughest enemies and how to defeat them.

Who is your favourite hero or angel in League of Angels - Fire Raiders and which enemy is the hardest to battle and why?

That’s a tough question - we have so many heroes and most of them can be really powerful when fully upgraded.

I think the deadliest hero is the Night Sentinel. His damage rate is incredibly high and he can often kill enemies with a single arrow. Mikaela is my favorite Angel. She is fiery hot and deals a ton of damage.

The toughest heroes to battle against are the Nether Knight, who is able to convert damage into health, and Zweihander, a tank who can take a ton of damage and remain standing.

What team and formation would you recommend to fight against these enemies?

To neutralize the Nether Knight, I’d pick a hero with the ability to stun or transform enemies into animals. Pyrona, with her power to turn other heroes into black sheep, would be a great pick and Amazon Hunter, who can stun enemies and would be a good supplement to Pyrona.

To deal great damage I’d get a solid tank, Zweihander or Earthshaker preferably, taking the brunt of the hits and protecting other heroes.

I’d also choose Djinni, who has saved the lives of countless heroes with her powerful healing skills and another popular choice is the Angel, Nyssa, who also has incredible healing abilities.

With a team like this, it’d be hard for anyone to take you down. 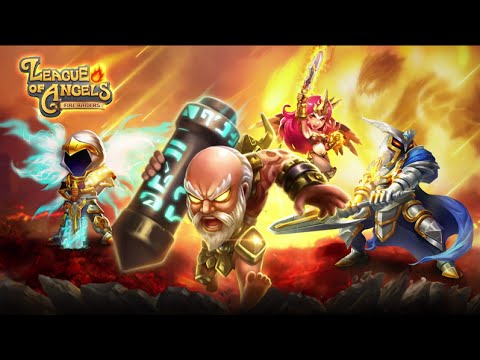 Subscribe to Pocket Gamer on
What are your favourite PvE and PvP game modes in League of Angels - Fire Raiders?

In PvE, the Angel Trial is a fun way to get soulstones and unlock new Angels. I also often get lost in the main quest and love battling my way through all the beautifully drawn maps and dungeons.

For PvP, the arena is currently my favourite mode, but we are adding a bunch of gameplay to the guild mode in coming updates, and some of the multiplayer features are looking very exciting!

Do you ever hold PvP tournaments in the office? Who's the best at the game?

Everyone around here is constantly playing the game on their phones or tablets, so you could say we are part of an ongoing 24/7 tournament!

I’d have to say that Cem Eren, one of our developers, is the current champion, but he is already being overtaken by several of our most dedicated fans.