It's a great life, reviewing games for a living. Until, that is, the editor hands you a title that's outside of your remit. Football games, for example. Yawn-o-rama city.

The lesson to learn here is that editors, generally, are clever people. They know what they're doing. So after initially throwing my eyes at the ceiling and my iPhone on the floor when Kind of Soccer landed on my desk, it's time to admit that the ed chose his reviewer carefully after all.

There's a hint of Subbuteo in the style of Kind of Soccer, blended with a dash of retro chic pixelisation and contemporary lighting effects that combine to offer a very cool visage. So right from the outset this game establishes itself as being just a little bit edgy, and a little bit hip. This is no bad thing, as it effectively takes the piss out of the sport and prepares you for that concept quite subtly, doing so without intending to offend.

Viewed from a slightly offset bird's-eye view, your players are fixed in place about the field as the referee scampers around blowing his obnoxious whistle. The objective isn't to score goals, but to hoof the ball at the ref and bring him down a peg or two.

Kicking the ball is achieved by pressing and holding on the player in possession, pulling back to add power, and then releasing in the appropriate direction. This might be to pass the ball to another member of your team and get it closer to the referee, or to take a shot and knock him off his boots. 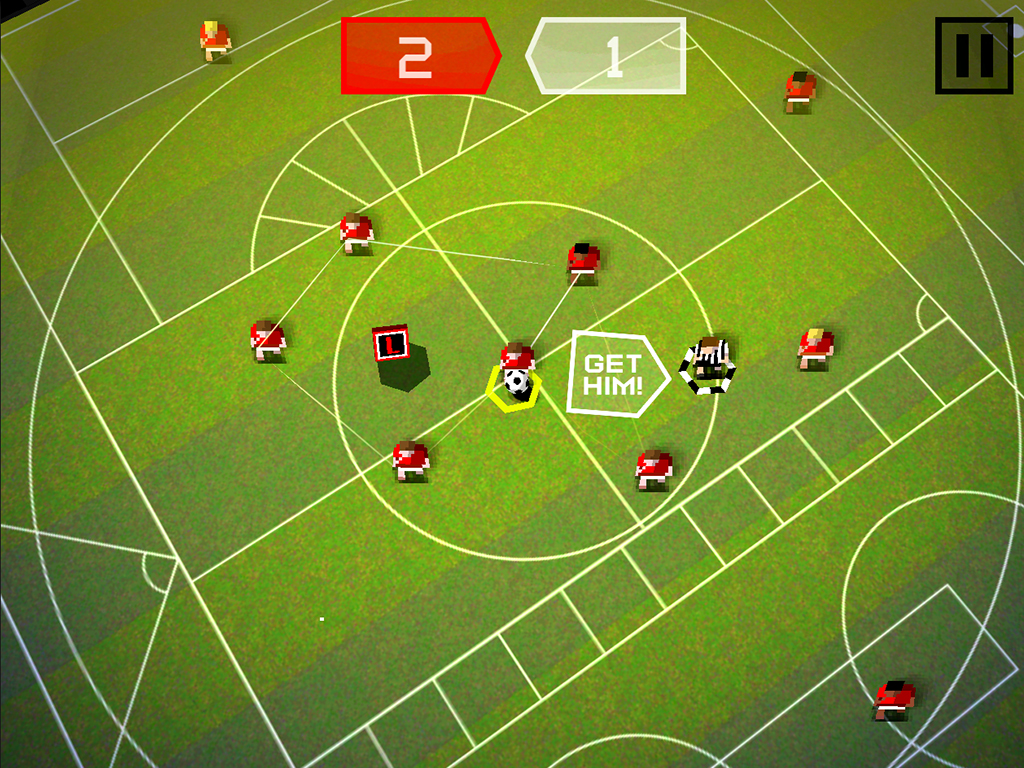 Power-ups, such as laser sights and bombs, are dotted around the field too, and are collected using the ball.

The opposition are also in play, wandering around the pitch at a slower pace than the ref, but still providing a significant obstacle that takes some consideration and a lot of skill to circumnavigate. Let the ball get away from you or fall into possession of the other team, and you're down a point.

Simple, but surprisingly engaging. If only the same could be said for ordinary football (controversial!).

How, then, do we classify Kind of Soccer? It's certainly not a sports game, despite its setting, and is instead found straddling the line between physics, casual, and puzzle.

When trees, other players, and obstacles get in the way and the timer is running, it takes a degree of tactical thinking just to figure out the optimal path around the pitch to get a clear shot.

And that shot is constantly changing as the ref runs for cover, so despite this not being a particularly cerebral puzzle game, it does still demand dexterity and some forethought to get ahead.

Football fans might baulk at having their beloved sport so casually lampooned in Kind of Soccer, but the developer made the wise decision to employ an antagonist that will ease that discomfort.

For those of us who don't care for chasing balls around a field anyway, it provides equally amusing, if light, entertainment.

Kind of Soccer is the kind of casual coffee time gaming that we bought an iPhone for. Easy, fun, and forgettable
Next Up :
Dr. Chatelet: Faith review - "A surefire way to make you appreciate modern medicine"