iOS
| Kid Tripp
Updated on July 29th, at 14:30: Kid Tripp creator Mike Burns tells Pocket Gamer that the platformer will cost 69p / 99c. Bargain. Platform fans with a love for all things retro are in for something of a treat this week. That's because Not Done Yet Games's Kid Tripp is leaping and bounding onto the App Store on August 1st.

Kid Tripp is a nostalgic auto-runner whose developer owes a debt of gratitude to Hudson for its Adventure Island series.

In the game itself, which is presented in gorgeous, thick pixels, you are cast as a bobble-headed explorer whose plane crashes on an island. From there, you'll need to leap and shoot your way through 20 levels spread across four different worlds.

You'll need to leap over spikes, bounce on tiny platforms, dodge snakes, evade crabs, and avoid birds. In later levels, you leap in mine carts and escape from lava flows. 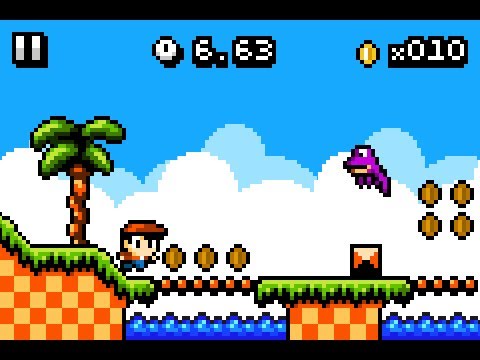 Everything in Kid Tripp is out to kill you. And while the levels themselves are pretty small, it's unlikely you're going to complete them at the first or even second time of asking.

The straightforward controls are just right for the job, and finishing a level is often a simple case of nailing a series of jumps and shots.

Kid Tripp definitely isn't something for the faint of heart. If you like a big chunk of challenge in your iOS games, then you're probably going to find a lot to enjoy in Kid Tripp.

Kid Tripp will bounce onto the App Store on August 1st. We've emailed the developer to find out how much it's going to cost. We'll be in touch.

Genre Moves: How smartphone and tablet gaming has changed the platformer

The Firing Line: 5 questions for Not Done Yet Games on Kid Tripp

Run through 4 retro-style worlds in this upcoming iOS platformer