Kathy Rain: Director's Cut, a revamped version of the point-and-click adventure game, is heading for iOS and Android this month

Today, Publisher Raw Fury and developer Clifftop Games have announced Kathy Rain: Director's Cut for iOS, Android, Nintendo Switch, and PC. It is an updated edition of the point-and-click adventure title, and you won't have to wait too long to play it either. It's releasing this month, on October 26th.

Described by the developer as a re-imagining of 2016's Kathy Rain, the Director's Cut will include an extended storyline, plenty of extra dialogue, and new areas to visit. Beyond that, Clifftop Games has implemented a few more tweaks, such as a remixed soundtrack, larger environments, control improvements and visual enhancements.

If you're unfamiliar, the game takes place in the '90s and follows the titular Kathy Rain as she investigates the recent and mysterious death of her grandfather. As a journalism major, she is used to digging deeper into stories, so she is well prepared to find out the truth. 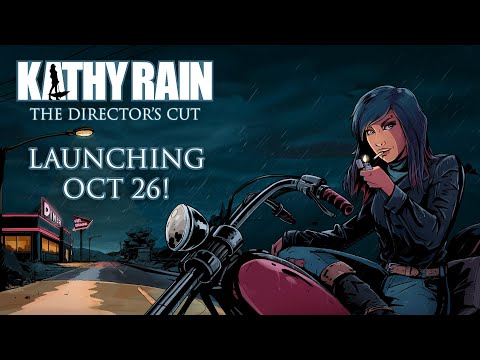 But as she uncovers more information, she soon realises something bigger is at play. Many people in Conwell Springs – her hometown – seem to go mad, including a young artist who tragically killed herself. The truth might not be what she wants to hear, but she simply has to know.

In terms of gameplay, Katy Rain: Director's Cut is a point-and-click adventure, meaning players can expect to interact with the environment in search of clues and useful items. They will also need to solve several puzzles to progress the story, and the Director's Cut includes additional puzzle chains alongside tweaks to the existing challenges.

Kathy Rain: Director's Cut will release on the App Store and Google Play on October 26th. Alongside mobile, the game is set to release on PC and Nintendo Switch.

Looking for point-and-click adventure games to play on the go? Here are some of the best available for iPhone and iPad
Next Up :
Harry Potter: Puzzles & Spells welcomes the Yule Ball with special rewards and an unlockable Epic Yeti