It's fair to say that Jydge is a tough game. It's the sort of game where a few shots from your foes will leave you as a red smudge on a neon-edged floor.

So coming to this mobile version we were a little worried. Touchscreen controls are all well and good, but would they be sharp enough to escape the barrage of bullets that a Jydge has to face every day?

Well, the short answer is yes. And the long answer is the next few paragraphs of this here review.

The game sees you playing a sort of Robocop-style enforcer. You're given a mission - rescue some hostages, stop a riot - and then you stomp in and figure out how to do it.

While the maps are small, there's no right way to do things here. You can make your own entrances and exits, blowing up walls with rockets or smashing through windows with your face. So long as you get the job done, that's all that matters.

It's nice to see a game that's engaged in such small-scale experimentation. Here's a little box for you to play in, run around and murder the people inside however you see fit. 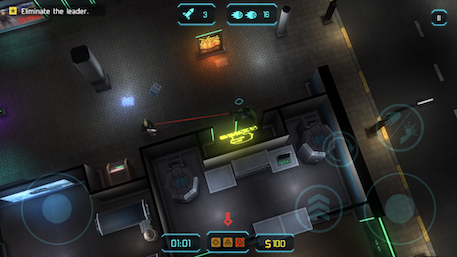 The conditions for failure here are pretty tight though. Kill a hostage? Game over. Get shot in the face a few times? Game over. And that's without the additional challenges that each level throws at you.

Sometimes you'll need to finish the level under a certain time limit. Even just looking at the numbers early on is going to make you feel entirely inadequate.

Thankfully you can power up your Jydge with new cybernetic enhancements. You can make your gun, which is known as a gavel, stronger, and even change the type of bullets it fires.

And it all controls really well. The joysticks you're using are responsive, and you'll rarely find yourself making a mistake because of them. Sometimes you'll make a mistake because you walked into a firefight you had no chance of getting out of alive, but really that's your fault.

Jydge is a great, difficult, nice looking cyber punk shooter that fits into nicely mobile-sized bursts. It's so much fun I can just about forgive the fact that it's called Jydge.

A game that balances tension, toughness, and violence in all the right ways
Next Up :
REDMAGIC 8 Pro review - "A beast in performance, but not without growing pains"