In this age of mobile and handheld gaming, odds are when you hear the term 'match three' it'll earn an eye roll and disgruntled sigh. After all, we've played Candy Crush to death, right?

Well, games like Ironcast are what breathes a little bit of life back into the mechanic, bringing it up from something mind-numbing and easy to something strategic.

It's made of iron

Ironcast is an interesting strategy game which first launched on Steam in 2015. It's hit a number of platforms since then but now it's out on the Switch.

Set in a steampunk version of 19th century Britain, you take up arms as the pilot of a seven-foot Ironcast and head into battle against an invading enemy.

Unless you're a madman I'd suggest not skipping the tutorial, as there's a lot of information to take in and the learning curve is steep. Like, super steep. 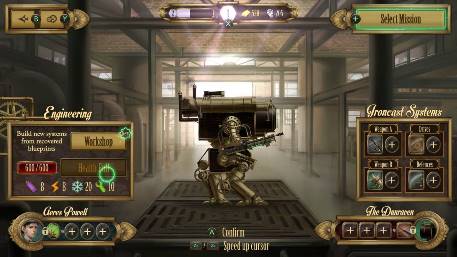 It may be a tad overwhelming at first, but when you knuckle down and fight your first few battles you get the hang of things pretty quickly.

During the actual fights you have four main nodes to match up. Each of the colours represents a bar which fills and depletes as you use your shields and firepower. There are a few other special nodes which help you power up your attacks and link different nodes together.

You've also got to keep an eye on other variables, like repairing your drives, shields, and weapons, whilst simultaneously trying not to overheat. So, you best use your couple of turns wisely.

Aside from varying in difficulty, fights tend to split between two categories: 'Battle' and 'Survival'. If you put your scrap into upgrading your weapons then Battle is the way to go. If you put it into defence then Survival should treat you nicely.

In the repair shop you have access to those options. If you collect enough scrap from your battles you can afford all sorts of upgrades built from blueprints pulled from destroyed enemy Ironcasts.

Toeing the roguelike line, there are a few typical things to point out here. Namely the fact that everything is randomised, from the missions to the level-up perks.

Whilst this does keep things fresh in an experience that you could probably boss through in a few hours, it does mean that you face a lot of aggravating moments.

In fact, there are a lot of points that are totally dependent on luck rather than skill, such as what nodes drop into the grid or where they fall. 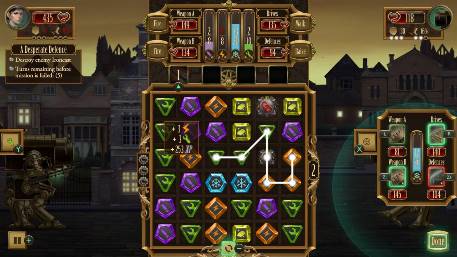 It's also a fact that because of this you die a lot. Again, thanks to its roguelike features, there's a whole lot of permadeath between you and sweet, sweet victory.

That's okay though. Considering there aren't any timers or real pressure points, you can do your best to think tactically and make the most out of your moves.

The controls are also pretty good. Handheld mode is where the game shines best given you can switch between touchscreen and Joy-Con controls easily.

However, if you're using touchscreen the selections can be a little flaky, especially if you try to connect nodes diagonally. Or, maybe I've just got fat fingers.

It doesn't transform though

I'd love to say the story was endearing but it dried up after a couple of battles and it got harder not to skip the mission introductions. Not that it really made a difference.

Ironcast is a decent game with a surprisingly deep tactical foundation. Simply dragging and matching won't get you very far here. No, you actually have to think about the best ways NOT to die.

If you're more of a 'point 'n shoot' or 'click 'n drag' sort of gamer, this one might not be for you.

Ironcast is a match three roguelike with surprisingly detailed tactical combat, but it's as much based of random luck as it is your own forward planning
Next Up :
Roller Drama review: "Scheme with your team, skate great"