iOS
| Into the Dark: Narakan

When it comes to odd, indie roguelikes, the App Store certainly has its fair share. But there's still something exciting about the genre, so when a game like Into the Dark: Narakan comes out, it's often received with a quiver of excitement and a simple question - what weird places is this game going to take us to?

Well, it's going to take you into memories, and then it's going to leave you alone to try and figure out what's going on. And at the same time it's going to fill your brain with joy and intrigue, and quite frankly those are two of the best things to fill any part of your body with.

The game takes place across gridded levels. You can move the little blue character one square up, down, left, or right. When you do though, the monsters, ghouls, and various other things that want to kill you make a move as well.

You start off woefully underpowered. Your little broken sword can only attack squares diagonally next to you. And you need to figure out how to use it as well. There's a box at the bottom of the screen with three spaces in it, and after a few plays you'll work out these represent your skills and weapons. Then you work out where to get them from.

Scattered around every level are totems. Find one of these and tap on it and you'll be given a memory. These are often built around traumatic events, but they give you a chance to pick a new skill, weapon, or buff. 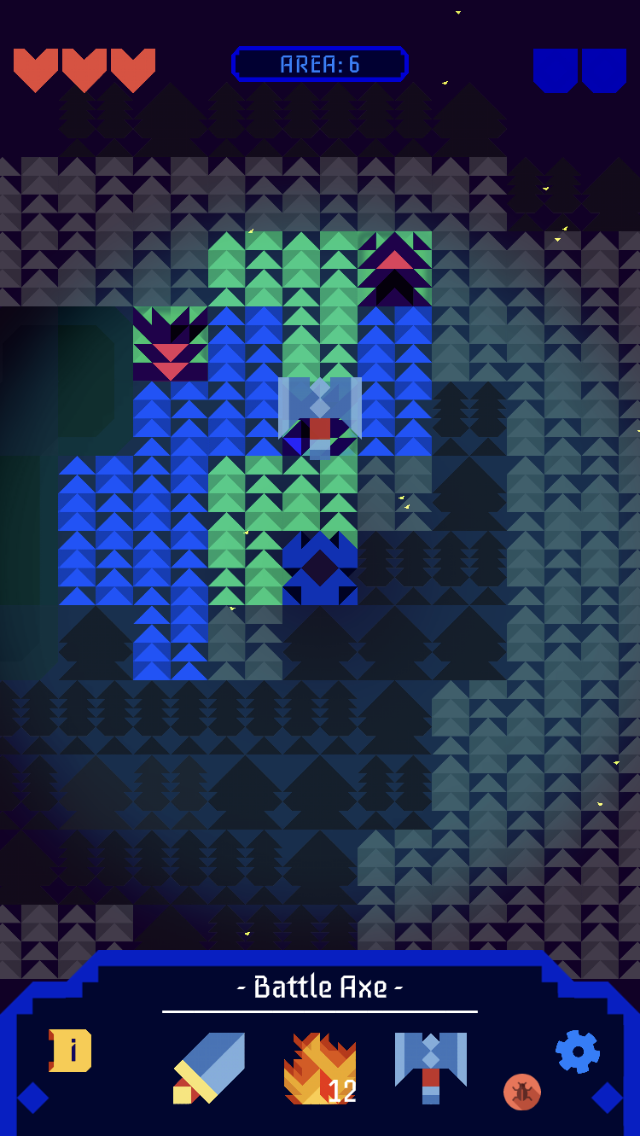 In essence that means you're constantly changing your set-up, finding new ways to kill monsters and swapping them out if you're not feeling them. Every weapon has its own range, which means you can jump huge distances to kill with some of them. That really helps when you're in danger of getting cornered.

There are spells too, and they don't just impact the beasts you use them on. Set a monster on fire, for example, and it'll wander around for a few more turns spreading the flames to any square it lands on. You can chain lightning bolts, and use vines to entangle enemies.

You always know where danger is. Squares that an enemy can attack in its next turn are highlighted, and you need to puzzle your way through, killing when you can but for the most part avoiding the attentions of the skittering black creatures that populate the game.

Into the Dark: Narakan has a wonderful story, a unique art-style, and a juicy core that's filled with potential. But it also manages to be brilliantly playable on mobile. You never feel scuppered by the controls, and the levels are short enough that if you need to put your phone down to do something else you're never losing that much progress.

Throw in an endless mode and you're left with a chunky and supremely entertaining roguelike that plays by enough of its own rules that it's difficult not to love.

Put simply, Into the Dark: Narakan is one of the best mobile roguelikes we've played in a long time
Next Up :
Netflix Oxenfree review - "Reading the signals of a thriller story"