We focus on players not platforms, says Creative Mobile CEO

Vladimir Funtikov on what really matters

As part of an ongoing series, SponsorPay - together with PocketGamer.biz - is running an interview series about market trends and future opportunities with C-level executives from key game developers and publishers.

Aged just 23 when he started the company in 2010, Funtikov has built the it into one of the largest mobile gaming outfits in Northern Europe, with one of the most popular racing franchises in the world, Nitro Nation Drag Racing.

It's had over 100 million organic downloads on Android - remaining in Google Play’s top 50 for more than two years and counting - plus over 12 million downloads on iOS.

Creative Mobile games have been downloaded over 170 million times.

How did Creative Mobile recognize the potential of Android so early?

Vladimir Funtikov: I think a lot of it was due to availability and pricing of iPhone in Estonia. I couldn't afford one, my friends and most of co-workers couldn't either. When Android came around packaged in a big plastic G1 body, it immediately looked like something that would become very powerful yet affordable.

Nevertheless, we had no idea of how big it was going to get. We expected would eventually grow big enough to allow developers to make a living, but we couldn't possibly foresee 1.5 billion activations by 2013, or the stunning quality of hardware and software.

On that level, our decision to develop for Android was a gamble.

How do you see the competition between Android and iOS developing?

This will depend on market share and demographics of each platform.

Our ultimate goal is to make a great product and to deliver it to the right type of player. We will choose the platform that allows us to do this most efficiently at any given time.

Your racing games are extremely popular. What elements drive this?

It's complexity hidden beneath ridiculously simple gameplay. With no steering required, Drag Racing looks like a game a 5 year-old could master in a day. But at some point, the player has to decide on what gear ratios work best with stage 4 turbocharger, and it all gets insanely difficult. 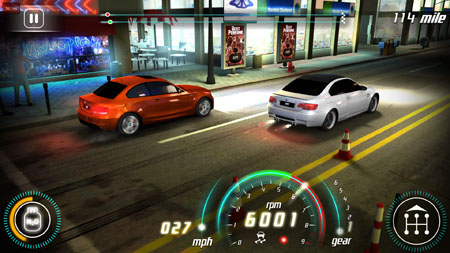 At the same time, we steer clear of pay-to-win and encourage fair competition in multiplayer. As a result, players take the game more seriously and invest a lot of time in it.

What is your vision for the next two years?

Compared to 2010/2011, we have significantly raised our standard for quality and have adopted a platform-agnostic approach, focusing on the player rather than technology.

Our focal point is our portfolio of racing games, with plans for at least three new exciting titles. At the same time we are working with a number of thirdparty studios in a publishing capacity, looking for games that could be interesting to our audience and partners.

What's your approach to monetization?

We've always been very careful about premium features and our approach remains the same: player satisfaction comes first and everything else is secondary.

We aim to make high quality games with lots of great features and content that players would be happy to pay for. We are also working actively with brands to introduce non-intrusive advertising in our games and reduce dependency on in-app purchases.