The power of numbers

During 2013, the ability to dig deep into the performance app stores and analyse them across platforms, countries and categories was vital.

Such market intelligence has highlighted the growing muscle of Google Play, not to mention the massive growth in countries such as South Korea and Japan.

And on a micro-scale, the ability for developers to be able to track the performance of their apps - and their competitors' apps - is becoming ever more important.

That's where companies such as Distimo come into play. The Dutch market intelligence outfit offers a range of free and paid services.

We caught up with co-founder and CCO Remco van den Elzen to find out more.

Pocket Gamer: Why is market intelligence and data so important for game developers?

Remco van den Elzen: Market data and intelligence are essential for game developers, as they ensure that developers will not be making important decisions blindly.

Companies such as Sega, Com2uS and Zynga all base important decisions on data. Tapping into market intelligence can empower you with information on where to focus your marketing spend, if you are cross-platform - what platform is providing the highest return and what platform has potential for your specific game.

Market intelligence can also give you insights into new successful apps in any specific category, letting you benchmark your own app against the market at large. You can analyze business models, track price changes and get a view of the app ecosystem globally.

On a daily basis, game developers are faced with questions like What platform to launch on, the best regions to localize for, and best business model to use for their games? Tapping into market data and intelligence allows developers to answer these questions and increases their margin for success.

What do you think are the key features that Distimo offers?

Distimo is the industry leader in market intelligence. We have a host of free and premium features for developers to use and learn from.

One key feature that only Distimo offers is our global leaderboard. Through our leaderboard, anyone can get a birds-eye-view of the app landscape and see rankings for 10 major app stores, for all categories, globally, at no cost. The premium version of the leaderboard provides actual download and revenue metrics for the apps along with the rankings.

Our premium product, AppIQ uses the same dashboard, but gives developers competitive intel - that is to say, download and revenue estimates for any app that is ranked, globally.

There's a lot of data available, but how can developers use it to make better decisions in terms of their products and business?

There are a lot of ways for developers to translate market data into informed decisions. It lets developers see what types of games are finding success in the market, or go even deeper and see if certain app stores are more likely to provide success to a certain type of app or game.

Market intel also gives insight into various business models that are successful for specific types of app. For example, games tend to be partial to the freemium model, but there are some regions where paid game apps have generated significant revenue.

Many clients are using our intel in pretty creative ways, for example the leaderboards are being used for lead generation.

Providing comparative data - especially in terms of competing products - seems to be a big trend at the moment. Why is this?

I think that having an insight into what your competition is doing has a lot of value, and people are finally realizing that.

Taking your own product and being able to benchmark it against your competition or other titans within the industry provides developers and publishers with unique intel on the performance of their apps and the potential of a certain type of app. 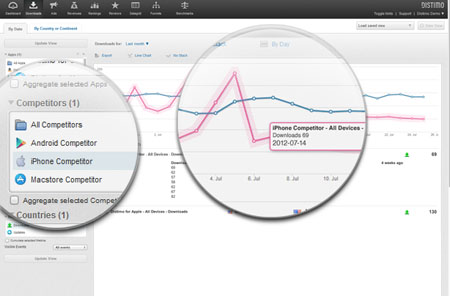 There are many use cases for benchmarking. For example, If your game is not performing well, but you are able to benchmark it against very similar games that have found success in the market, then you can take a look at the mechanics of the games that are doing well and see how they stack up against your own product.

How big a move was it for Distimo to move from market intelligence into areas such as conversion tracking and ad network data?

I would definitely not say that Distimo has moved from market intelligence. Market data and intelligence is the heart of Distimo's product.

It's what we do. Along with having the most accurate market data in the industry, we have created a host of products which developers can use for free, and in our effort to provide developers with the absolute best free market data platform we have expanded the platform to include conversion tracking and ad network data. 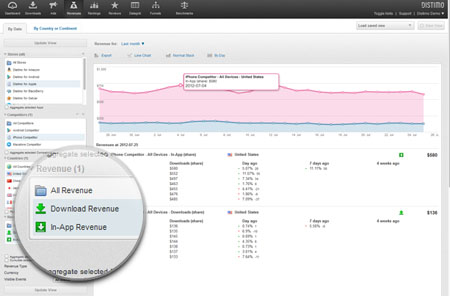 Developers often spend a significant amount of money on advertising, and we see being able to track the efforts of their marketing spend as a natural extension of their apps' market metrics (downloads and revenue). #

Therefore, in order to give developers a holistic view of how their app is performing, through our free platform, we have invested a lot of effort into our conversion tracking tool and partnerships with key ad networks. That being said, our premium product is market intelligence.

What do you think are the key trends and opportunities in the global app ecosystem for 2014 that developers should be considering?

So we can expect that revenue share to continue growing in 2014. Secondly, In the Amazon Appstore, 63 percent of all downloads, were generated by games. In 2014, we can expect to see this emerging as a converging trend.

You can find out more about Distimo's services via its website.