It's just weeks to go before Pocket Gamer Connects 2014.

Our first conference will be held in London on 20-21 January - you can find out more details here.

So to whet your appetite, we're finding out more about some of our speakers.

Steve Gray has spent the last five years working as executive-in-charge of production for Tencent in China.
Prior to joining Tencent, Steve was the executive producer for several of the Lord of the Rings console games at Electronic Arts.

Steve also founded Heavy Iron Studios, which he sold to THQ, and worked for Square as the director of PlayStation hit Parasite Eve.

What do you think has been the most significant event for mobile games during 2013?

Steve Gray: I think the biggest event for Tencent is the launch of the WeChat games platform in China.

That games platform will also be available on WeChat outside of China very soon.

What do you think will be the biggest challenges and opportunities in 2014?

I think one of the biggest challenges is the lack of repeatability on the part of even some of the most successful developers. This is making the industry extremely volatile and a difficult place for investors.

One argument could be - who needs the investors anyway! But the cost of a high quality mobile game is becoming high enough that it's outside the easy reach of a 'garage operation'.

Of course, the fact that a hit can literally 'come out of nowhere' is cool, and is a good thing.

How will indie developers fare? Any advice?

I think the next few years are going to be very exciting for indie developers. There's still so much opportunity to create cool new ideas that can just explode into the marketplace.

The tough thing is going to be getting money to complete projects. It's going to be too expensive from a production quality standpoint to just go it alone.

How big do you think the East-meets-West opportunity is, and which markets are you most excited about in 2014?

My area of expertise is clearly China. I think the opportunities for western publishers are in strategic alliances with Chinese operators, since it's not possible for those publishers to operate games themselves in China.

But even then, I think it's unlikely that a Chinese operator would do a portfolio or pipeline-wide deal to bring all of a western publisher's products into China. It's going to need to be on a case-by-case basis.

Actually I think the most exciting opportunity in China maybe for developers, and perhaps moreso for indie developers, because a Chinese licensing deal could provide the badly needed capital to complete a project.

What are you expecting to learn from attending Pocket Gamer Connects?

Because Tencent is very interested in working directly with developers and with the indie community to find and help bring to market great games, hopefully we'll meet some great developers and find some great products!

What were your favourite mobile games of 2013?

From Tencent, it's the Airplane Shooting game that was the first game to release with the WeChat game platform in China.

Outside of Tencent, I love Telltale's products. Actually, I like a lot of different mobile games, it's hard to pick a favorite. Growing up, I was a hardcore arcade player and so many of today's mobile releases remind me of those old arcade games that I was so addicted too.

Finally, what's your New Year's resolution and what resolution would you enforce on the industry?

My New Year's resolution is to think at least one truly disruptive thought each day.

And I'd like to enforce that on the industry ... which is another way of saying "Enough with clones" already.

Nowhere is the idea of 'genetic fade' more obvious than in the game industry. Each clone becomes a weaker and weaker replica of the original. 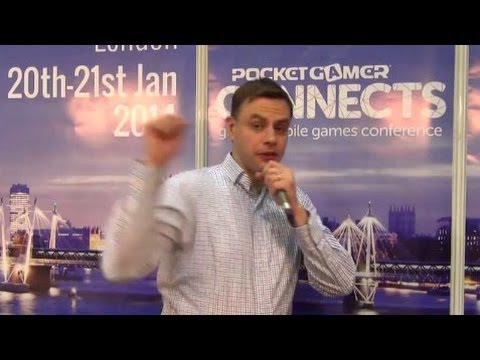