AppVersal on the difficulty of app discovery

It's all about better brand recognition

Creating an incredible mobile game is only half of the struggle when you're also trying to get it into the hands of players.

In order to them to become aware of your game, you'll need to get exposure, and - for many developers - the most effective way to get exposure is to invest in marketing.

We caught up recently with the social media-focused Appversal to see how its pay-for-fans model stacks up to other marketing approaches, and what value it can offer developers and publishers in the west.

Pocket Gamer: App marketing is a hot issue for anyone trying to get discovered, how can AppVersal help a small developer get its game noticed? AppVersal: App marketing is definitely a hot topic right now that is becoming a necessity as more and more apps get added to the App Store every single day.

Without marketing, it is extremely hard to get an app noticed. There are millions of users who make the market extremely large, but at the same time, there are thousands and thousands of apps all competing to be downloaded and placed on the screens.

This is where AppVersal comes in to help developers effectively market their apps.

AppVersal clearly identifies the areas where the app is not performing well and boosts it to increase sales.

What's the most popular service that you offer?

While our three packages along with design packages make the base, we build custom packages for our leading clients.

We’ve got many recurring clients for whom we keep modifying packages to deliver the best form of marketing for their investment. 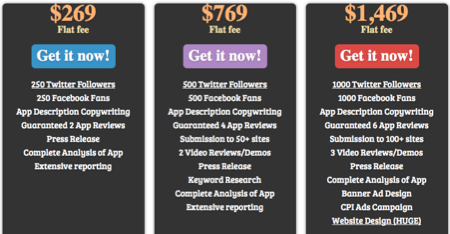 Much of your marketing relies on buying social media followers, so are you concerned that some might view these 'zombie followers' negatively?

Every Twitter follower we provide is 100% organic. So how do we do it? We follow and unfollow manually in large numbers.

We only follow people from the iOS and Android app industry that includes fellow app developers and users to build up the numbers.

They definitely increase engagement rates. All followers will be from different parts across the globe and non-incentivized.

They won't follow if they don't like your handle. We've seem tremendous success with this form of marketing which when later combined with a giveaway of an iPad, does wonders.

Is it possible for a developer to get an app discovered without a strong social media presence?

It's one of the pillars of better brand recognition. Once you've got a loyal fan base, it is easy to get them interested in any of your future products, updates and offerings.

Building a social media presence from scratch is hard. It takes a lot of sharing valuable content, regular updates, great profile design and most of all - pure perseverance.

What impact will your guaranteed app reviews have on a new app's discoverability?

We take a lot of care to make sure that only the best apps are submitted for reviews.

Media publications have a lot of engaged readers and followers who listen to the recommendations made by the publication. Once recommended, an app's sales are likely to boost up.

You claim that an app's icon is 'one of the key secrets behind successful apps' - do you have any data points to back this up?

An app icon is clearly 'one of the key secrets behind successful apps', but that's not it.

It's part of it. Design as we all know, plays a crucial role in the way a user perceives a product. We've designed many icons, screenshots and user interfaces for apps, both from the ground up and as a redesign. With redesigns and updates, with a great icon, a client clearly notices a heavy increase in sales.

You can find out more about Appversal's service here.