Huntdown is an 80s inspired side-scrolling shooter that has received critical acclaim since its initial launch last year. Now it has made its way over to mobile devices, and I think it's a pretty fun time. But perhaps you'd prefer a second or third opinion, so we handed the game over to our App Army to see if they agreed.

Huntdown is a "run n' gun" platformer inspired by the 80s (cheesy one-liners, art style and soundtrack included). The gameplay is smooth, focusing more on the action department. You play as 1 of 3 possible mercenaries that must hunt down (pun intended) different gangs across several districts. These gangs feel distinct from each other, both in terms of appearance and overall weaponry.

Plus, each level culminates in a unique boss battle designed to test your skills even further. The learning curve is reasonable and you really feel like a retro badass after taking down the big hitters. I would have loved to see more fun and unique "gimmicks" in the levels themselves, but this is more of a personal preference rather than direct criticism. There's not much in the plot department, but that's hardly a fault, considering the type of game the devs were aiming for. I really enjoyed this game and I highly recommend it - we are talking about a high-quality indie game (and they hardly get better than this). 9.5/10

« Rhaaaaaa, please don’t moove! » yells a boss in rock music background, and also many other invectives - our hunter does not deprive himself either, even making ironic jokes in accordance with the weapon he uses. So I will obey the boss I mentioned earlier and take a break from the game to list some of its qualities. Thanks to the creativity shown by its designers, Huntdown manages to avoid the monotony that often occurs in games with a fairly linear "beat them all" orientation: many details, visual, musical, or textual, give a very strong personality to the game, and renew the pleasure of progressing.

Controls are responsive (although I would have appreciated a little more mobility for the hunter), animation very neat, nothing disturbs the immersion. As an action game, Huntdown is a success, but above all, it succeeds in its evocation of this violent, crazy cyberpunk environment. And bosses are badass!
Highly recommended if you are looking for a game in this category.

Huntdown is a throwback to 16-bit goodness. It is a side-scroller with lots of bad guys, a lot of weapons, and action all over the place. I love the dialogue and the witty humour. This is the complete package. I stuck with the virtual controls until I got the hang of it. You can customize them in the options menu. I also used my PS4 controller and it worked great too. I played at the normal difficulty and it is tough, but not enough to make me want to play at the easy level. This is an easy recommendation to anyone that likes a good action game and then some.

Huntdown is probably one of the most fun and challenging games I have played in quite some time on mobile and is definitely worth every minute played. Huntdown is an 80s inspired platformer game with easy controls, awesome music and great sound with a beautiful art style. You get to play as 3 different bounty hunters working through different zones and killing mobs, collecting different weapons and grenades then eventually defeating the gang boss.

I tried some of the game on normal and found it quite hard at times also very challenging but found the game a little easier on easy mode, bosses can be quite difficult to beat but make the game so much more fun learning how to take them down. arcade mode is fun and challenging as well but recommended only to play after you have finished the game in story mode. Huntdown has controller support which I tried and worked perfectly for me, even made the game a little easier to play. If you like 2D arcade shooter style games Huntdown is worth the purchase, time spent on and I definitely recommend giving this game a try it is very enjoyable.

I really like the “try before you buy” IAP model. Huntdown gives you a nice idea of what you are in store for, and any fans of run-n-gun side scrollers such as Contra or Gunstar Heroes will feel right at home. I really like the menu screens; as they show you what boss you are going to face, along with a little background of the situation.

The touch controls are decent, customization options are available. The game also supports controllers and comes bundled with an Apple TV version. The sound design is great, with a thumping soundtrack that keeps the action going. All-around: I am having a great time with Huntdown and I would recommend it highly. 8.6/10 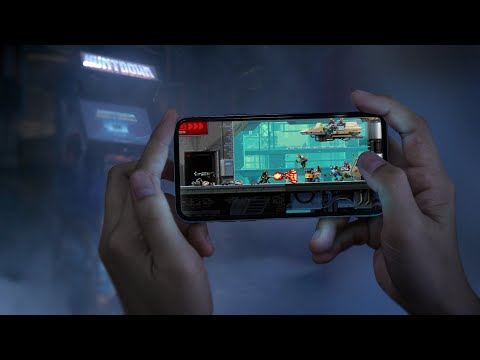 I really enjoyed this game. There were no fancy graphics or complicated controls, but it was still a great looking game. From its retro arcade style, its soundtrack (including a deep-voiced introduction like the old fashioned movie trailers) and easy to use controls, it ticked a lot of boxes. The storyline gives you missions and side missions that are straightforward to follow and not too easy to complete - meaning the game won’t be over too quickly, so value for money. All in all a good game and I would definitely recommend it.

Huntdown is a game that looks and plays like a 90s arcade side-scrolling shooter and does it very well. You start off with an intro and then pick a bounty Hunter from 3 only difference is their appearance and throwable weapon. You have now been given your assignment and then shoot your way to them you can upgrade your gun on the way by picking up weapons. Besides the main bounty, there are some small ones you can choose to collect as well.

You do come across different types of enemies with various weapons and some it’s best to take cover but you can just run in all guns blazing, and you then proceed to the main bounty you were assigned the end of level boss. The controls I found were spot very responsive the only issue I had was the jump button, you can change the d-pad to an arcade red or blue joystick and they can be repositioned and resized. You get a story mode and an arcade mode. Overall I would recommend this.

I just visited an arcade yesterday and Huntdown would feel right at home with all the classic quarter munchers. The game begins by choosing 1 of 3 characters each with a different starting throwing weapon in addition to the standard weapons loadout. The objective in Story mode is to seek out different bosses as your main target while shooting your way through many bad guys. The levels have a bit of verticality to them which allows for some strategy, especially in boss fights. There are multiple weapon types that will drop from enemies that act as types of power upside until you run out of ammo.

I love the duck and cover system when taking on groups of enemies. There is a fair bit of challenge with the enemies and bosses and their various attack patterns. The pixel graphics manage to have a lot of detail and cool 90s style effects. I am very pleased with the controls overall and appreciate controller support as well. Huntdown is the perfect "one more try" game in my opinion. It's a decent challenge with fair play mechanics. I definitely recommend this game if you enjoy a lot of retro action with decent variety and some replayability.

Huntdown is a retro look and feel run and gun side scroller. I was initially worried that the pixel style may look a bit stretched on a big tablet-sized screen but it actually looks fantastic, the colours, art style and sound combine to create a retro yet modern feeling game. It reminded me of games from the era that you either played in the arcade for hours and hours or on your home computer before they were PC’s. It’s the type of game that’s easy to get into that you didn’t need a tutorial to play before you had any idea what was going on, but hard enough to keep you coming back for more as you got better the more you played.

The controls are tight and supported a controller so you can play whichever way suits you, both options work great. There are lots of game mechanics in the mix here, cover shooting, multiple weapon types, end of level bosses etc but they all combine well and you can see whoever coded this has a love for the genre. I could go on and on about the game but if you like run and gun games, this is for you, don’t even think about it, get it. Probably one of the best games I have reviewed on here.

Huntdown is a retro-inspired arcade shooter with plenty of action and platforming. The gameplay and visual design are excellent and really succeed in creating an atmosphere. I like this game a lot. However, the controls are atrocious. It is all too easy to hit the wrong button, which, in a game as tight and difficult as this one, can lead to some frustrating and untimely deaths. There are few customization options as well, which means you have to put up with and adjust to the frustrating controls. All in all these problems aren't big enough to put me off from buying the game, but they certainly have incurred my wrath.

Next Up :
Interview: Deyan Trichkov discusses March of Empires' new faction, the Shogun

Huntdown, the 80s inspired side-scrolling shooter, is available now for iOS and Android