After missing the announcement of developer Aconite's debut title, HoloVista, late last year, I feel compelled today to bring you news of its existence – mostly because it looks pretty darn cool.

It's a story-driven puzzler in which you'll explore a strange mansion packed full of secrets. You play as Carmen, a young artist tasked with photographing every inch of the mansion's interior by a mysterious architecture firm.

It takes place in a "near-future social media world", meaning you should expect to spend a good deal of your time sifting through Instagram-style posts. The story sees you confronting your deepest secrets, then confessing them online for all to see.

The mansion itself could prove to be one of this year's standout video game settings. Opulent and frankly more than a little garish, it looks quite unlike any game space I can think of in recent memory. 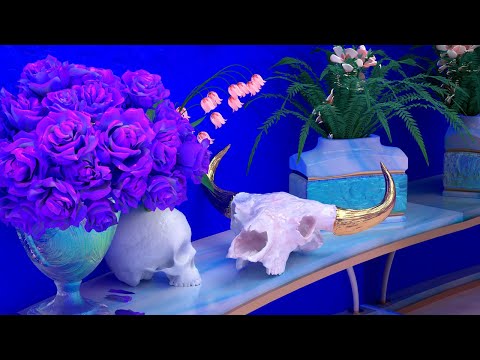 What's even more intriguing is that, as you continue to explore, you'll realise that the job you've taken is far from what it seems. That architecture firm is up to something, and you'll soon be on a quest to find out what.

The core gameplay sees you exploring the mansion and taking in the various rooms from a fixed point. You'll be able to turn the camera a full 360° to analyse everything around you. Part of your job is photographing specific items dotted throughout the mansion, though they shouldn't be too tricky to spot considering how visually loud they often are.

HoloVista is currently slated to launch for mobile this year. A recent job listing for a Game Writer posted on Aconite's official site suggests that it could arrive nearer the tail end of 2020. It's also currently unclear as to whether it'll come to both iOS and Android.

Whenever it arrives, I'll be right there waiting. The trailer has gone and sold me on the concept, and I'm very much looking forward to unravelling the mansion's mysteries.

Searching for more top-tier narrative adventures? Here are five of the best for iPhone and Android
Next Up :
Space War Battle Cadet DX lets you match colours to defeat enemies, out now on Android