Hexy: Puzzle Adventure review - Does it all fit together?

Hexy: Puzzle Adventure is equally as addictive as it is irritating. Seriously, it's a 50/50 split.

Whilst that means half of the time you're enjoying yourself, the other half you're not, and that's always going to be a problem.

After all, the whole idea of a puzzler is to provide a challenge that keeps you both baffled at times and intrigued enough to find the solution.

As you could've guessed, Hexy: Puzzle Adventure is a puzzler all about building hexagons from the same coloured tile. Since the pieces you're using are all different shapes, it's your job to try and fit them together without making unnecessary moves.

You've got a select number of goes before you're likely to fail miserably and have to start again. So, it really is a game about strategy more than just shoving things in and hoping it'll make something if itself.

One of the major positives of the game is that it doesn't have a timer counting down alongside your moves. Given how tricky some of the levels are it'd be a rather unwelcome distraction.

By using simple tap-to-rotate and drag-to-position mechanics, it's basic in the right places.

Aside from your original selection of coloured tiles to rotate and squish in, you've also got pieces that can erase shapes on the board, as well as special moves - like getting rid on an entire row of unusable shapes.

The reason this is a pretty useful is because each time you want to move your shape list along it'll cost you one move, and that can really dry up your goes quicker than you'd think. 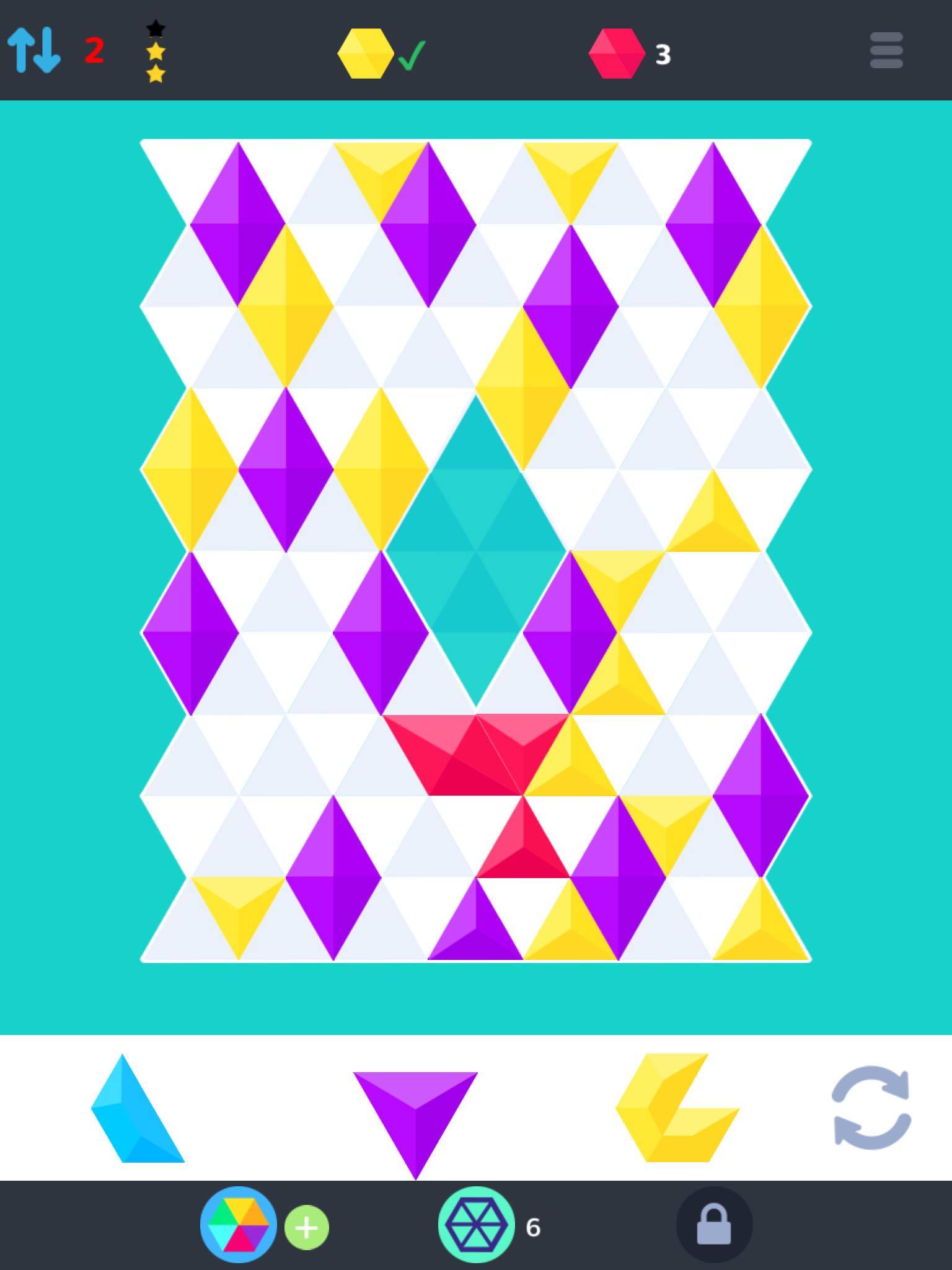 As for most of these puzzler-types you can add a few turns at the end of the round by paying in gems, hearts, or souls - whatever the gaming gods call for - and off you go.

Sadly, these extra moves don't get you far and you'll likely still have to restart the adventure.

The game's major hinderance is that it feels incredibly luck-based. With a random assortment of coloured shapes appearing to use each time, you could be dealt a lucky/unlucky hand which shapes your chances of victory.

Its second major flaw is in its more random levels. It has levels of various spaces which requires you to work smartly to build your hexagons - that's totally cool - but when it introduces unnecessary colours, that's where it loses you.

It's not so much the unusable colours in the base grid that are problematic, but rather the ones that appear in your selection. These sorts of levels eat up moves in seconds because you're trying to skip the colours you don't need, and it's extremely annoying.

Hexy isn't a bad game, it's just a little confused at times.

It has a repetitive but pleasant soundtrack, simple visuals, and un-cluttered gameplay mechanics that make it easy to pick up and play.

It's just such a shame that it makes you want to bite something in frustration when you feel you just can't catch a break. And that's more likely to make you give up altogether than battle through it.

Hexy: Puzzle Adventure review - Does it all fit together?

Hexy: Puzzle Adventure is a nice, simple puzzler with some unfortunately basic flaws
Next Up :
Hundred Days review - "A success for the management genre"