The Samsung Galaxy S8 was nothing short of revolutionary. It was the first phone from a major global hardware manufacturer to boast a larger-than-normal display with minimal bezels and an 18:9 aspect ratio.

Since its launch last year the S8 has inspired a flood of similar devices, the most notable of which is of course the iPhone X. Now that the big-screen trend is well and truly established, the impact of Samsung's Infinity Display is arguably diminished - yet it has stuck with the same basic design for its 2018 challenger, the Galaxy S9.

Does this handset have enough new tricks to overcome the familiarity of its design? And - perhaps more importantly - what's it like to play games on? Read on to find out.

Unless you really know what to look for, you might be hard pushed to tell the Galaxy S9 apart from its forerunner, the S8. From the front it's almost identical, and all of the key bits and bobs are largely in the same places - the telltale sign that this is a newer model is found on the back, where the fingerprint scanner has moved to just below the camera module (on the S8 it was placed to the right-hand side, and was a pain in the bum to locate in a hurry).

This aside, there's little in cosmetic terms to set it apart - which isn't necessarily a bad thing, as the S8 remains a handsome-looking phone, even after 12 months on sale. 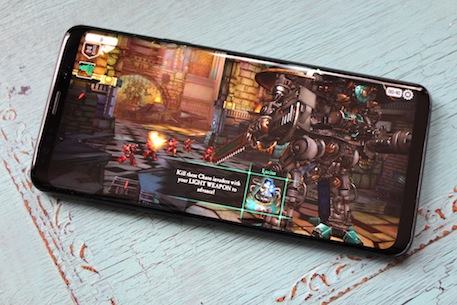 The front is taken up by that massive 18:9 screen, while the back is glossy (and smudge-happy) tempered glass. A metal frame runs around the edges, with the volume control and Bixby assistant button on the left and the power button on the right.

The bottom of the handset has the USB Type-C port and one of the two speakers - the other is the earpiece itself. There's also a 3.5mm headphone socket on the bottom, too - you get a pair of AKG-tuned headphones bundled in the box. The phone is both water and dust resistant, which is pretty much standard on most flagships these days.

The Galaxy S9 is available in two flavours, the standard S9 and the S9 Plus. The big differences between the two are that the S9 Plus has a larger 6.2-inch screen and a secondary telephoto camera; the Plus also has 6GB of RAM instead of the 4GB found in the base model.

Samsung's screens are often regarded as best in class, and it's not hard to see why - the Super AMOLED panel on the Galaxy S9 is nothing short of fantastic. It has a resolution of 1440 x 2960 pixels and a body-to-screen ratio of 84.2 percent.

Because it uses OLED tech, black pixels are actually switched off, giving deep and convincing contrast. It's basically one of the best screens you'll find on a smartphone in 2018. We also love the way it curves off on the edges, too. 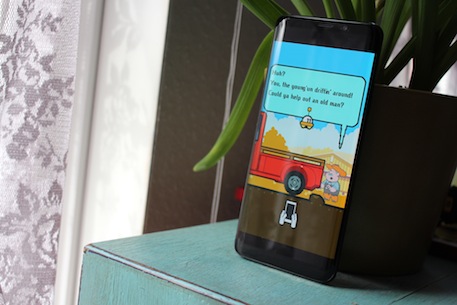 The Galaxy S9 takes huge strides in the audio department, boasting stereo speakers on the front - last year's model had just a single speaker. Both of these have been tuned by Samsung-owned AKG, and when pushed up to maximum volume sound incredible.

This naturally enhances the phone's suitability for immersive gaming experiences, and for watching movies, and listening to music sans headphones.

As you might expect, this year's model runs faster than last year's - that's how it works in smartphone land - and with the Samsung-made Exynos 9810 Octa chipset powering European S9 units (you get the comparatively-powerful Snapdragon 845 in North America and China), there's more than enough juice on tap.

Overall performance is silky-smooth and lag-free, and thanks to that generous helping of RAM, multitasking is a breeze. 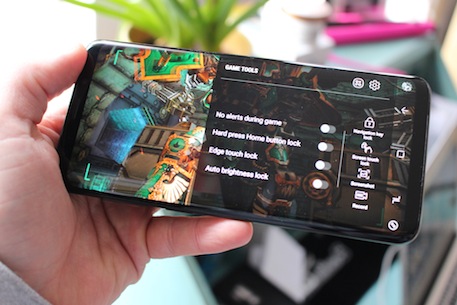 Samsung's TouchWiz UI sits atop Android 8.0, providing little embellishments such as customizable themes, GIF capture direct from your screen, and "Apps Edge", a slide-out panel packed with shortcuts and other cool stuff.

Samsung's track record when it comes to keeping its phones up-to-date in terms of software isn't great, but at least the S9 has Android Oreo straight out of the box. Samsung's Bixby AI companion is still a bit on the naff side, though - Google's own assistant app is better at pretty much everything. 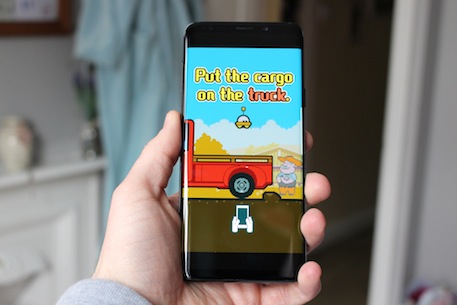 Despite the high-res screen the S9 is a fearsome beast when it comes to gaming. It positively chews up intense 3D titles like Real Racing and Warhammer 40,000: Freeblade. While a great many Android games are poorly optimised for the platform, the S9's brute strength is usually enough to get a decent level of performance out of them.

Handily, Samsung has included a range of gaming-focused settings - such as full-screen modes, recording, and the ability to turn off notifications during gameplay - which make playing on this device even more enjoyable.

Samsung has made quite a song a dance about the camera on the S9, and with good reason. The 12 megapixel main snapper has a fancy dual aperture setting which allows it to mechanically toggle between f/1.5 and f/2.4 depending on the available light.

While the Google Pixel 2's low-light shooting is pretty special - and achieved without the need for a variable aperture - the S9 seems to perform better, at least to our eyes. We were able to take shots in really, really dark locations and they came out with no fuzziness issues.

The S9 Plus also has a telephoto lens for x2 optical zoom, which is handy - it also allows for Samsung's "Live Focus" system, where you can add bokeh effects and even adjust the level of background blur after the image it snapped. 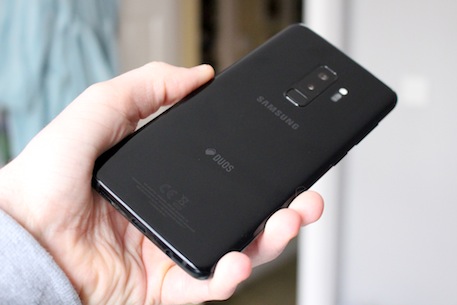 The other big news is super-slow motion, which records 0.3 seconds of footage at 960 fps. The catch is that you can only record at 720p, and it struggles in low-light conditions. We won't waste too much time talking about AR Emoji however - this is essentially Samsung's attempt to clone Apple's Animoji, but it doesn't perform anywhere near as well and is best ignored.

While Samsung hasn't given the S9 a big battery boost (there's a 3000 mAh battery in the S9 and a 3500 mAh battery in the S9 Plus), stamina isn't an issue. We were able to get a full day of use out of a single charge (quick charging and wireless charging are both present, by the way) and for those times when we needed to be careful with available juice, the phone's built-in power-saving modes came in handy.

You'll still need to charge at least once a day if you're a heavy user, but overall, the S9 performed well in terms of battery life.

The Galaxy S9 is the best phone Samsung has released thus far. It's the most powerful, it has a great screen, and boasts a really, really good camera. However, it's not the massive leap forward that the S8 was, and if you already own that device then you might want to hold off upgrading until next year. 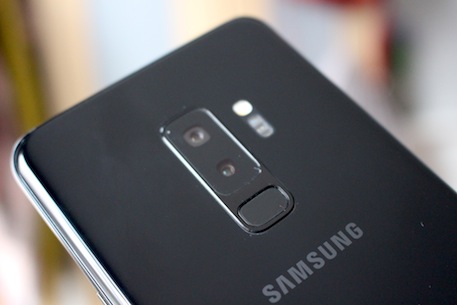 It's clear that handset makers are struggling to find areas they can genuinely innovate in these days. Samsung has pinned its hopes on its variable aperture camera, which - while excellent at taking low-light shots - might not be enough reason for people to upgrade.

However, if you're due a new phone and want the best Android can offer right now, then this comes highly recommended.

It may not be the revolutionary step-up that the S8 was, but the S9 is still the best Android smartphone you can buy at this moment in time
Next Up :
Pawnbarian review - "A minimalist roguelike that's hard to put down'"