Hack, Slash, Loot isn't the most minimalist roguelike you'll find on the App Store, and it manages to retain some semblance of lore and a wider universe as you poke your way through its deadly dungeons.

But it's simple enough that anyone can swipe their way through its blue-hued underworld, hacking up kobolds and lizardmen as they do.

It's not a particularly rewarding adventure in the long term, but in the short term there's more than enough pure gameplay here to satisfy a violent underground craving. 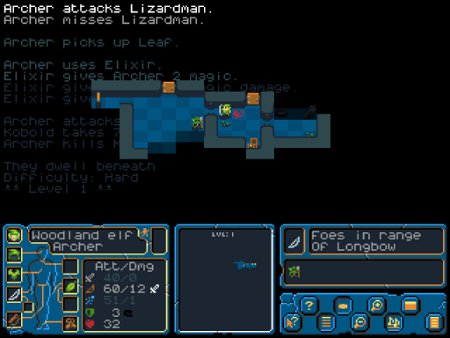 At its heart the game is a random collection of encounters. You can choose a specific hero if you want, but there's something much more entertaining about leaping in blind and seeing where the world takes you.

There are brutal saracens, noble nights, magic-spewing wizards, and fey arrow-blasting elves for you to get to grips with.

The controls are easy to master. Swiping in a direction on the screen moves you that way, while a long press on a specific square will send your character scurrying in that direction.

You can attack enemies by tapping on them, or by tapping on their image in the bar at the bottom of the screen. Switching equipment and picking up dropped potions involves more tapping as well.

The aim of the game is staying alive for as long as possible. There's a vague slice of story at the start, but really you're just bundling through dungeons, doing your best not to get hacked to death.

And to start off with you're going to die a lot. The game punishes you mercilessly for running in, and being surrounded basically spells imminent death. 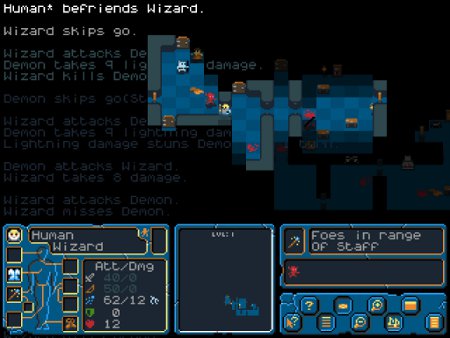 Much like in real-life, your friends will eventually turn on you and smash your head in with rocks

But once you understand the rhythm of the game things start to flow in a much more pleasant manner. The progress you make is slight, but it's enough that you'll think maybe next time you'll get to the end of a dungeon.

Hack, Slash, Loot certainly isn't as deep an experience as the likes of Wayward Souls, but that's not really the market it's aiming for.

Instead it's a game to fill in a few moments here and there. You don't need to remember where you are in the story or what quest you're on - you just jump in, kill some stuff, and then jump out again.

If you need another game like that in your collection, then Hack, Slash, Loot is as good a bet as anything else on the App Store.

Hack, Slash, Loot is a perfect roguelike if you're looking for a gaming snack. If you want a larger meal, you might be disappointed
Next Up :
Hero Emblems II review - "Lovely visuals and music, but match-3 combat lacks strategic depth"

Out at midnight: Hack, Slash, Loot is a deep but accessible roguelike that's perfect for your coffee break