Proudly wearing its influences on a blocky sleeve, Guns Royale is a shooter that sets out to bring PlayerUnknown's Battlegrounds to mobile. And it's managed a semi-respectable job.

Your 8-bit gunner is dropped off on a tropical island with 15 other players. Your sole aim is being the last person standing. To ensure victory, you'll be firing off AK-47s, collecting health packs, and picking up pieces of armor for protection.

As the game progresses so the playing field shrinks, inevitably forcing you to get more comfortable with your adversaries and wrap the match up as quickly as possible. It can get quite tense out there.

As an online only game, however, errors can really plague the experience. We've seen lag spikes, corrupt servers, and drop-outs, which, in turn, stunts progression and development.

Guns Royale allows you to customise a Minecraft-ian character however you see fit, fixing them up with anything from cowboy hats, to a scout uniform.

Of course, you can purchase loot crates with in-game coins if that's what you're into, but the core experience isn't locked behind a paywall.

That said, you can upgrade attributes like speed, defense, and ammo capacity using rarer gems which are acquired through performing set criteria. However, those gems are available to purchase from the main menu at any time.

Meaning, while you could grind and do all the hard work, there are certain ways to boost yourself to success if you're willing to splash the cash. 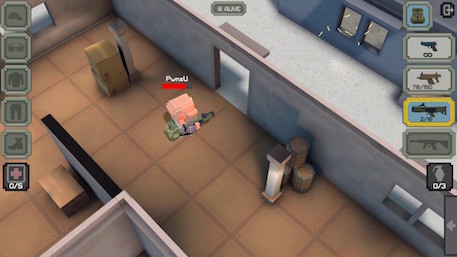 And unfortunately, that can become noticeable early on with some characters whizzing around the map like they're Usain Bolt and others who seemingly never run out of bullets.

Which is a shame because the game actually plays very well when you're on a stable connection and a level playing field.

Even the virtual sticks are aligned and responsive on a well-sized screen, with the left side controlling your character and the right controlling the flow and direction of your shots.

The various guns pop appropriately, the angle of the camera ensures a good view of the battlefield, and the game will even fill spaces with bots to try and reduce wait times as much as possible.

You want to root for Guns Royale as there's clearly been a lot of time, effort, and energy put into it. It's not a bad game, and best of all it has such an active community that you'll find a game in no time at all.

The plethora of errors do pile up, though, and the lack of any single player content or mode variety means you're restricted to only one passage of play.

Then there's the AR functionality which is, unfortunately, a waste of time. It's really picky about the surfaces it will allow you to play the game on, and when you do manage to find one, you'll probably wish you hadn't.

Still, there's limited risk attached to Guns Royale. This is a free app brimming with potential. It's easy to imagine this is a game that will go from strength to strength in the months ahead.

But while there's a decent foundation in place right now, the game is a little too rough around the edges to give a full thumbs up.

Still a few content updates away from realising its true potential, Guns Royale could grow to be a monumental mobile hit
Next Up :
Hero Emblems II review - "Lovely visuals and music, but match-3 combat lacks strategic depth"