A hero armed with weapons, magic, and gear. Claustrophobic corridors where ghoulish enemies lurk. Loot to find, equipment to equip. Guild of Dungeoneering has all the elements of your classic dungeon crawler.

Except in this game, you're not the hero. You're essentially the cruel, calculating dungeon master building the dungeon and quest around your hero. However, a frustrating reliance of luck threatens to dull Guild of Dungeoneering's charm and clever concept.

Guild of Dungeoneering's premise is that rather than controlling your hero directly, you instead build the dungeon around him through cards drawn each turn. At least three cards must be placed, be it an enemy, room, or loot. Entering a room with an enemy initiates turn-based combat, drawing abilities and attacks from your deck to fight bats, goblins, imps, and all manner of otherworldly foes.

Survive, and your earned loot can unlock new classes like the mime or mathematician, explore new areas, and upgrade your guild. 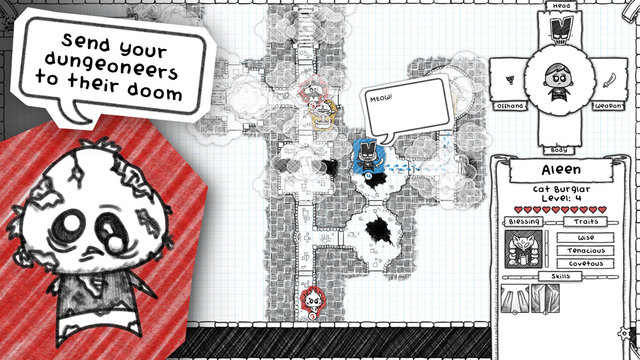 The combat itself is quite strategic, due to the varied classes and how different equipment add unique abilities to your deck. Battles tend to revolve around balancing your health with your attacks and defense, sacrificing health for a more powerful blow or building up a devastating magic strike over several turns.

Luck of the draw

But those battles are just the short bouts in between the dungeon crafting and traversal, and in those aspects, Guild of Dungeoneering falters. The hero guides himself throughout your dungeon, and despite the lure of loot in the next room or a lower level enemy, he might frustratingly ignore the treasure or go fight a tougher enemy instead.

It can feel less like a game of strategic card placement and more like a silent hoping for your hero to choose a good path.

However, despite that element, Guild of Dungeoneering still compelled me to keep braving its halls and regions. And that's thanks to its humorous atmosphere, charming aesthetic, and the steady rate of interesting unlocks - from new rooms for your guild to new perks and buffs.

Guild of Dungeoneering may frustrate in some aspects, but its charm, style, and concept still make this an interesting and unique dungeon crawler
Next Up :
Netflix Oxenfree review - "Reading the signals of a thriller story"