This is a review of the Vita version of the game. Grim Fandango has always been a hard game to recommend.

Not because it's bad. Oh, no, quite the opposite. This is an exquisite adventure game that has a more inventive setting, more interesting characters, and smarter dialogue than most games released this decade.

You play as Manny Calavera - a travel agent for the Department of Death who helps the recently deceased figure out how they're going to make the trip across the treacherous land of the dead, to get to the afterlife.

The virtuous can get an express train, while lowlifes and scum bags must walk. But when a sweet girl named Mercedes is forced to walk, Manny decides to chase after her. Cue a four year adventure across the underworld.

It's a game that mashes up film noir with Mexican folklore, and has characters who are believable, funny, and heartfelt. It's a truly memorable story, set in a wonderfully creative world.

The leg bone's connected to the..

So yes, fans do want to recommend that their friends check this game out. But they don't, because it's such a pain to actually play these days.

"You should play Grim Fandango", you'd tell a friend, "but it barely works on modern versions of Windows, you'll need to buy a copy off eBay and install a few workarounds, deal with unbearably bad controls, and put up with low resolution 3D art."

Luckily, this new remastered edition fixes all that. It's now on consoles, there are point-and-click (or tap) controls and rethought joystick controls, and you'll find welcome extras like director's commentary, cloud saves, and concept art.

And while the visuals remain largely untouched, there are subtle changes that improve the game without changing it. For the remake, important textures (like Manny's face) are higher resolution and new dynamic lighting and shadow systems add to the film noir atmosphere. 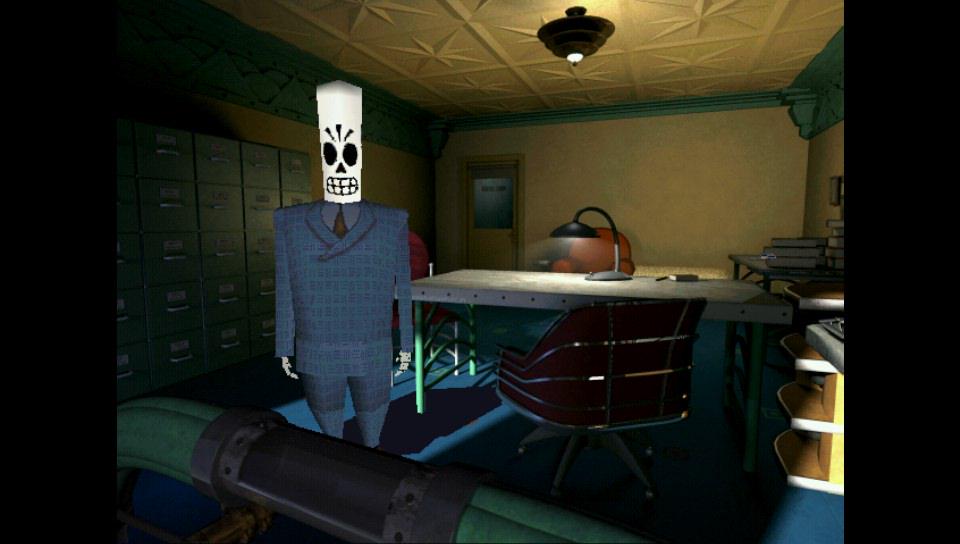 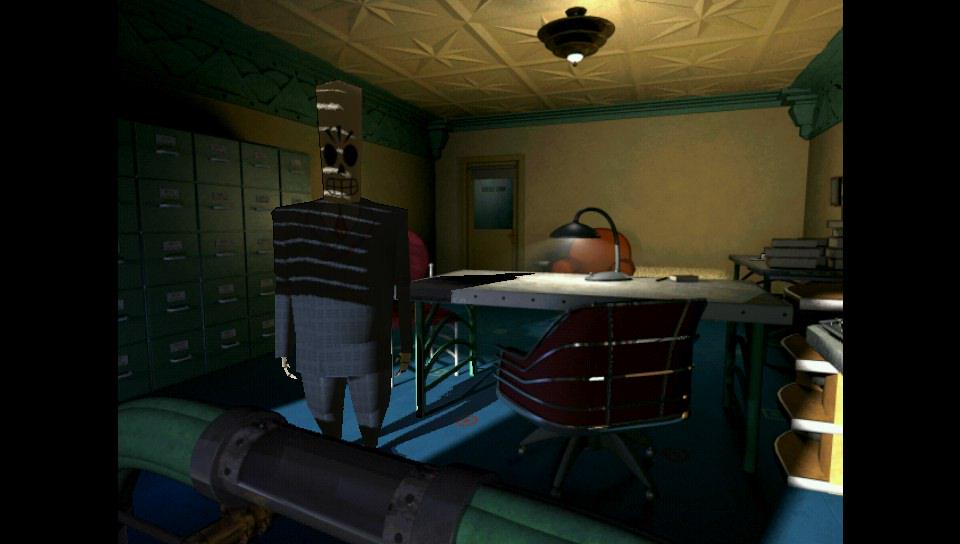 But all is not right. Those remastered textures stand out against the low-poly models and the grainy low-resolution backgrounds, making for an uneven visual style. You can change back to the retro version if you prefer.

And while the new controls are welcome, neither work perfectly because the game wasn't originally designed for them.

The game's camera angles are designed for tank controls where pressing up moves Manny forward, regardless of the camera. By changing that, Manny will sometimes change direction while walking simply because the camera changed.

The point and click controls are nice (though, quite fiddly on the Vita's small touchscreen), but it's hard to know where to tap to change to a different location because the scenes were designed for Manny to simply run off screen.

And while the story holds up in 2015, the puzzles feel like a dusty old relic of the past. You know, like watching an old Loony Tunes cartoon and then realising that, man, Bugs Bunny is totally racist.

Nothing has been changed to address this - the puzzles are identical to the 1998 version, there are no hotspots to show you what objects are interactive, and there's definitely not hint system in there.

The remastered version irons out a lot of the kinks, with the improved - though not perfected - controls being the star of the show. So there's no longer a technical impediment to getting the game.

But the obtuse puzzles remain a sticking point, and modern day gamers will find them difficult to stomach without help. "You should play Grim Fandango," you'll tell your friends, "but don't leave the house without printing out a walkthrough".

Grim Fandango Remastered fixes a lot of the flaws of the epic original, but reminds us why we never actually completed it in 1998
Next Up :
Jade Order review - "An puzzling path of the warrior"

Grim Fandango Remastered is at its cheapest price yet on iOS

Grim Fandango Remastered is now available on iOS and Android

Cult classic Grim Fandango Remastered is out on Vita in the US, hits Europe tomorrow