War is over: Developer 'shitstorm' results in big push by Microsoft for Great Big War Game

Of the many criticisms developers may level in Microsoft's direction, it would appear one – an unwillingness to listen to the development community – can be withdrawn.

Following the revelation by Rubicon that Microsoft was reluctant feature the Windows RT version of iOS and Android smash Great Big War Game, the Redmond giant appears to have acted.

Rubicon owner Paul Johnson took to his studio's blog to reveal the game was making just £52 (around $83) a week in revenue, which he claimed had much to do with its then un-featured status.

A further interview with PocketGamer.biz revealed that it was Great Big War Game's status as a Windows RT only release – a PC publishing agreement with another party restricting the game to just Microsoft's Surface RT tablets rather than Windows 8 as a whole – that was behind Microsoft's decision not to feature.

However, with Johnson having pulled his original blog piece following contact from Microsoft – Johnson claiming it had "graciously decided work with us to iron out the problems" - Great Big War Game is now being pushed on the Windows Store.

The release now has a place amongst Microsoft's spotlight on new releases, and has also earned a place in the marketplace's noteworthy games category. 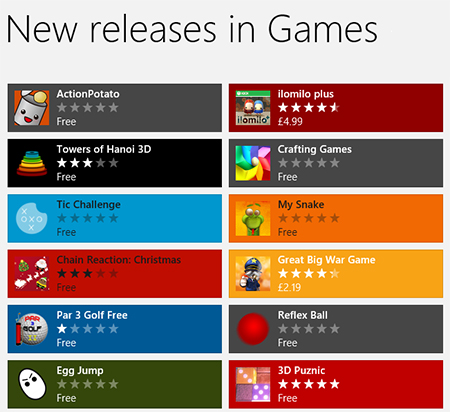 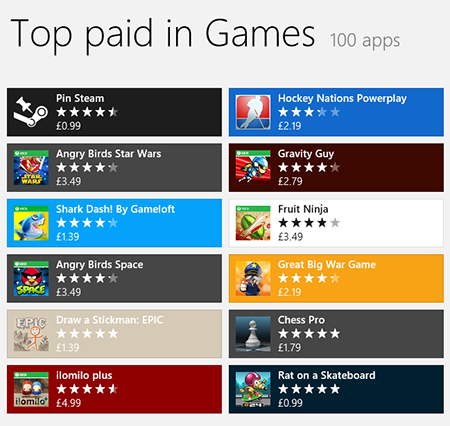 "When Microsoft got back in touch with us, it did explain that the big spotlight thing is still only applicable for across-the-board Windows 8 products, but there is some discretion about what it could do locally on RT," he told us via email.

"I guess this is the result and I'm overjoyed to see it."

Johnson states that his original complaint was never built around "a sense of self entitlement" - some developers claiming Rubicon has no right to expect Great Big War Game to be featured on every app store it's launched on – although he admits that's how it may have looked "in a certain light." 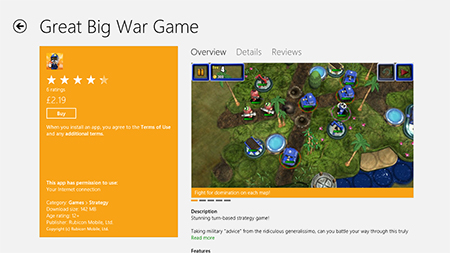 "Our core issue is, and always has been, the lack of any notion of a separate marketplace just for tablet customers. I still don't understand that, but it's Microsoft's bat and their ball so I guess I shouldn't complain," he added.

"I would've preferred it if somebody had told us this before we dived in though, as the other big players all do it differently."

Johnson explained that Great Big War Game's visibility on the Windows Store was hampered by the fact it couldn't be labelled as 'tablet only', as some tablets – including Microsoft's own forthcoming Surface Pro – run the full version of Windows 8.

Indeed, it's only the existing Surface RT range that is restricted to Windows RT, meaning Great Big War Game had to be labelled accordingly.

It's Microsoft's intention to present as unified a marketplace as possible, delivering apps – whether for Windows RT or Windows 8 – from the same portal.

That's a strategy that may placate consumers, but it runs the risk of antagonising developers, Johnson believes.

"Our big mistake was expecting there to be a tablet only store when we started this several months ago, which would've allowed us to promote this tablet game as the tablet game it is," added Johnson.

"That in turn, in theory, might make some form of spotlight support eligible in light of the fact that there are very few launch tablet games to chose from.

"That there isn't even the concept of a tablet store of course rules all of that out completely, and left us with a product aimed at the smallest possible subset of customers, without possibility of additional aid.

"If you're a tiny indie studio who needs to allocate time and money very carefully, that's not a great place to be."

Johnson notes that despite the "shitstorm" he caused with his blog post, "our local Microsoft developer support contacts have never been anything short of excellent."

After the smoke clears: A post-mortem on Great Big War Game