If video game supergroups existed, GoNNER would be one of them.

Rather than strive for innovation or a unique mechanic, developer Art in Heart has simply spliced together features from the best roguelikes and 2D platformers to create the ultimate package.

And the result, as you can expect, is pretty extraordinary. It's closest to Downwell, with minimalist artwork that doesn't get in the way of the shooting action. Hell, shooting and bopping off heads feels distinctly Downwell.

But the world is all The Binding of Isaac. It manages to be eery, hellish, and disturbing, while at the same time absolutely adorable. You'll feel tense the whole time you're playing it, but you won't mind if your three year old nephew wanders in.

You play as Ikk, a sticky pair of legs who's trying to cheer up his land-bound whale of a best friend Sally. That involves travelling down to the depths of some underground world to find her lost trinket.

The problem is, Ikk doesn't have a head. And the underground is packed with dangerous monsters itching to kill Ikk. Fortunately, Ikk has another friend, Death, who provides him with a skull, machine gun, and backpack to help him. 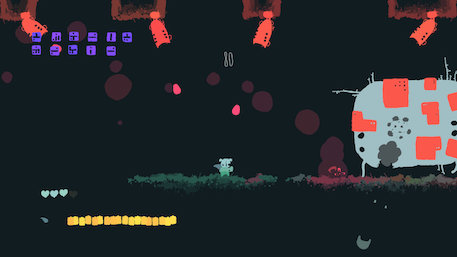 Thus begins the cycle of shooting all the enemies, using a power-up to reload your gun, and dying.

As you'd expect from a roguelike, this is really hard. You're going to have to learn exactly what Ikk is capable of if you want to excel, as well as the attack patterns of all enemies.

Fortunately, that's a super fun process - and the simple control scheme never gets in your way.

Another roguelike GoNNER borrows heavily from is Spelunky. Levels are procedurally generated here, which keeps you on your toes.

Each run, you'll never quite be sure what you're up against and that's great, since you're going to be dying and restarting a lot.

Along the way, you'll also unlock different skulls, weapons, and backpacks that vary up your skillset. Once unlocked, you can visit Death before each round to grab your favourite combo, and that's a real game changer for the genre.

It lets you play exactly as you want to, rather than making you feel like you just got lucky. It also gives you a nice sense of progression, and makes the difficulty feel more fair - you did pick that setup after all. 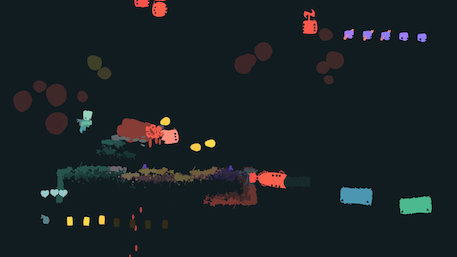 The game also gives you a tangible reward for skill. If you manage to stream together a bunch of kills in quick succession, you'll grab a purple block.

These act as currency, and let you buy upgrades or a new life if you die. Play well, and you'll have a ton of them.

GoNNER is an excellent roguelike chock full of charm, secrets, and atmosphere. It's tough but fair, and there's a nice sense of progression thanks to permanent unlocks.

You'll die a lot, but you'll never feel frustrated because it's always your fault. And you get tangible rewards for improving at the game. You'll unlock new weapons and grab more of the currency that lets you come back to life when you die.

The fact you can choose any combination of your unlocks at the beginning of each run encourages you to come back. There's no real element of luck to this roguelike, which is nice. As a result, I always felt compelled to have another go.

If you like roguelikes, chances are you're going to love GoNNER. It's not a revolution for the genre, but it's arguably the finest yet thanks to a few small tweaks. It's also accessible and friendly enough for first timers. Just get it.

GoNNER isn't a roguelike revolution, but a celebration of the best the genre has to offer in a neat little package
Next Up :
Milo and the Magpies review - "A burst of colour and a short but touching story"

The hardcore platformer GoNNER's Switch launch has been delayed