The auto-runner and the brawler are two very different genres. One's all about speed and reactions, the other's about fluidity and violence. Mashing them together can pose some pretty difficult questions.

There have been games where it's worked, like Punch Quest, but they're the exception rather than the rule. Which brings us to Golem Rage, a new take on the idea that throws some extra bits and bobs into the mix.

And while it might not quite get things perfect, there's definitely enough going on in this vaguely comedic pegging-it puncher that you're going to enjoy the time you spend with it.

As you might be able to tell from the title, the game is about an angry golem. It's not the smartest of creatures, but when its makers start picking on it, it decides the best course of action is to run away.

Of course the people in the castle it lives have other ideas and try to stop the fleeing creature. And that's where you come in. Using a variety of taps and swipes you need to clear a path to the exit. 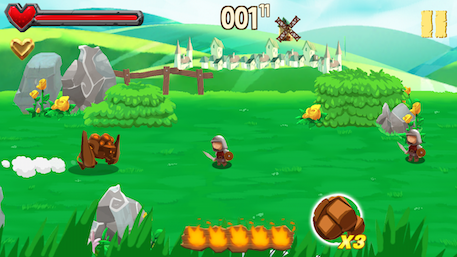 Moving your thumb up and down the left of the screen moves the golem the same. Attacks are controlled on the right of the screen. There's a button for punching, while swiping left grabs and throws a foe, and swiping right performs a roll.

Then you've got special moves that you perform with quick taps. These are powered up by skill orbs, which you collect by punching and throwing. It's a simple system, but it gives you room to experiment with your attacks rather than just hammering the screen. 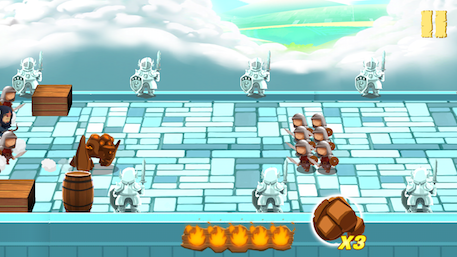 The main problem here is that there never really feels like there's any weight to the golem. While the attacks should feel like massive poundings, and the sheer size of the creature should barge through most things, quite often you get stuck behind a single soldier.

But when the game gets things right, it's a blast. There are light RPG elements here, as well as time-limits to chase in each of the bite-sized levels. The game looks good too, and for the most part the controls work pretty well.

No, it's not perfect, but it does provide a pretty meaty distraction. And it's definitely the best runner-brawler hybrid that we've seen in a couple of years, and for that alone you should probably pick it up and give it a go.

It might not be the perfect match, but there's enough going on in Golem Rage that you're going to enjoy it
Next Up :
REDMAGIC 7S Pro Supernova Lords Mobile Edition review - "A true powerhouse dedicated for mobile gamers"